“We Are The World 25 For Haiti” is the re-recording of the iconic 1985 philanthropic anthem produced by Quincy Jones and co-written by Lionel Richie. 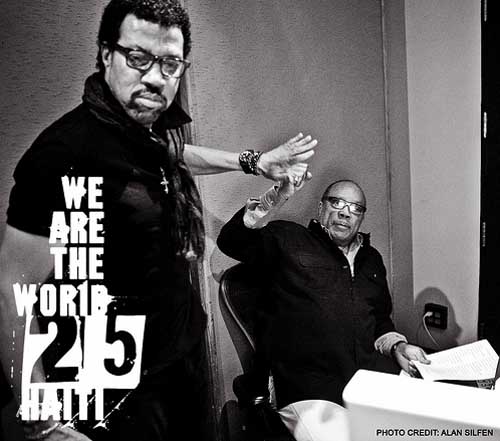 This contemporary version, in which Jones and Richie serve as executive producers and producers, was created in collaboration with executive producers Paul Haggis, Wyclef Jean, Randy Phillips and Peter Tortorici; producers Humberto Gattica and RedOne; and co-producers Rickey Minor, Mervyn Warren and Patti Austin to benefit the Haitian earthquake relief efforts and the rebuilding of Haiti. This production was made possible through financial support from Visa Inc. 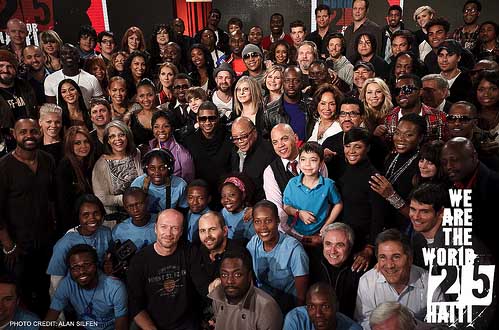 An unprecedented 53 United States broadcast and cable networks and over one hundred international networks were assembled by NBC Universal, FremantleMedia Enterprises, AEG Live and GroupM Entertainment to create the network for Saturday’s “roadblock simulcast.” 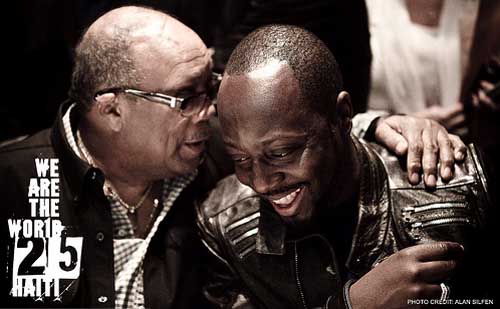 Haggis, an Academy Award-winning writer-director (Crash, Million Dollar Baby), whose own personal efforts as well as those of Artists for Peace and Justice have already saved countless lives in Haiti, filmed the private recording session to create the accompanying video and “behind-the-scenes” production. 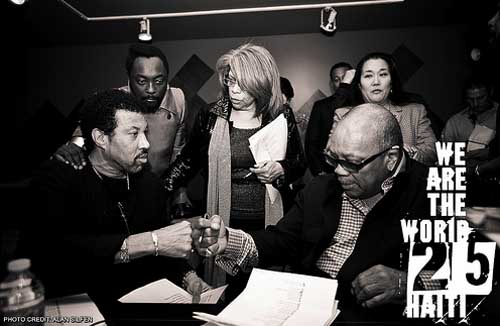 Fans can now immediately download the song and view exclusive footage from the recording session on the official website: WORLD25.org. Downloads are also available on the iTunes Store. Additionally, through a partnership with YouTube, the video is viewable on the “We Are the World 25” YouTube Channel www.youtube.com/wearetheworld with immediate donations made possible by clicking on the “Donate Now” button on YouTube or at WORLD25.org.

Commented Jones, “It warmed my heart to see that the experience during the recording of We Are The World 25 For Haiti embodied the same enthusiasm, sense of purpose and generosity as the original recording 25 years ago. Every one of the artists who participated, regardless of genre or generation, walked into the room with their hearts and souls completely open to coming together to help the people of Haiti. Through the contributions of their voices to this new rendition of ‘We Are The World,’ and with the help of our partners, the We Are The World Foundation will be the most transparent not-for-profit foundation ever created.”

“When I was first approached about recording a new version of We Are The World, I was lukewarm because the first effort was so iconic, then Haiti happened and I realized that this was the kind of crisis for which the song was originally written,” said Richie. “The new version takes the copyright to a different place while staying true to the iconic nature of the original. What a better way to help rescue our Haitian brothers and sisters in distress, bring a heightened awareness to that country’s plight and needs, and bring some of the world’s greatest talent together. The result speaks for itself so DOWNLOAD TO DONATE!”

All proceeds will go to the We Are The World Foundation, a newly created not-for-profit organization founded by Quincy Jones and Lionel Richie who have invited Wyclef Jean, Paul Haggis, Randy Phillips, Peter Tortorici and Ambassador Luis Moreno of the Inter-American Development Bank to join them on the board. The Foundation is dedicated to raising money and making grants to charitable organizations with meaningful and efficient relief and development programs that are responding to the continuing crisis in Haiti. Charities are currently being identified whose relief programs best fit the Foundation’s vision of marshalling the support of the community for the benefit of the victims of disaster and poverty. Grants will soon be made and the funds put to work towards charitable and relief efforts. Until then, The Foundation will hold and guard the funds dedicated to this important work.

“I am touched by the enthusiasm and support we are seeing from the entertainment community,” said Wyclef Jean. “With the continued efforts of the global community, we increase our chances of successfully bringing Haiti much needed relief; and taking the next step in reconstructing a 21st century Haiti.”

“Careers are often measured by the positive effect of one’s actions on the human condition, not just by the accumulation of wealth,” said Randy Phillips, President & CEO, AEG Live. “When AEG Live and I were asked to help squire this effort by Lionel Richie and Quincy Jones, we knew this would leave an indelible mark on our souls and on the rebirth of the island nation of Haiti. Our mantra throughout the entire process was simply: FOR HAITI!”

Upon its original release, We Are the World quickly became the fastest selling single in history and in the years that have followed, USA for Africa has raised and distributed more than $63 million in revenue from the sales of more than 7 million units of the album, single and cassettes, plus nearly 2 million digital sales and related merchandise. Just over half the total was spent on emergency relief (food, medicine, and refugee services) and the balance was used to support more than 500 different relief, rehabilitation and development projects in 18 different countries in sub-Saharan Africa.