DETAILS of the forthcoming Belfast Nashville Songwriters Festival have been released and tickets are on sale. The annual music festival, which will take place throughout the city from February 28 to March 9, will see over 90 acts take to the stage.

Visiting artists in the lineup will include everyone from Irish band Bagatelle to Live Aid co-founder Midge Ure and American Chip Taylor.

Highlights of the event include: Folk musician DONOVAN will play at The Holiday Inn on February 28 while American songwriter CHIP TAYLOR will be performing at The Empire Music Hall on the same night.

Live Aid co-creator MIDGE URE will take to the stage at The Holiday Inn on February 29. Local bluegrass and roots band WOOKALILY will headline the [email protected] gig in the Holiday Inn on Sunday March 2.

BAGATELLE will perform on Thursday March 6 and BAP KENNEDY on Sunday March 9 at The Holiday Inn.

Also playing throughout the festival will be local singer/songwriters CIARAN MCELHINNEY, GARETH DUNLOP, KAZ HAWKINS and MIKE DONAGHY as well as bands such as THE DANDY HORSES, SAFFYRE, CHASING PERPETUA and BRIGID O’NEILL BAND. 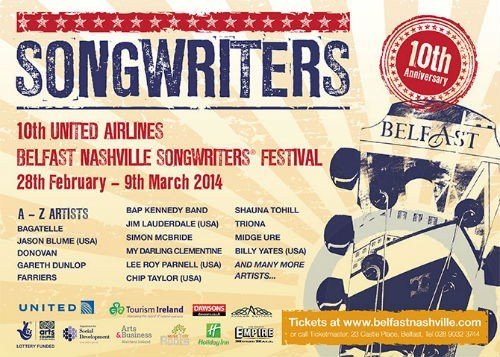 For more information and tickets log on to: belfastnashville.com