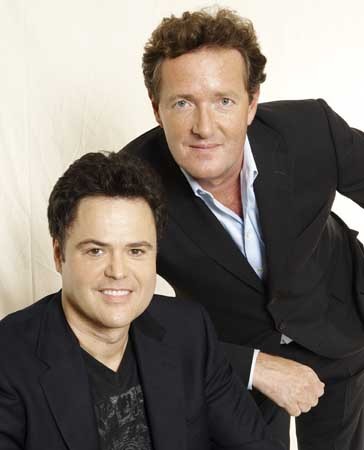 Presented by Piers Morgan, You Can’t Fire Me I’m Famous delves into the private lives and careers of high profile celebrities who at one time dominated the media headlines due to their high profile sacking, or resignation.

During a frank and indepth interview Donny Osmond speaks exclusively to Piers Morgan about his rise and fall from fame.

At the age of six, Donny Osmond was a TV Star. As a teenager he was the biggest pop star in the world, and even had his own TV show on American network ABC.

But, less than ten years later, his squeaky-clean image had become a liability. His TV show was axed, his record label dumped him and he was humiliated on Broadway. At the grand old age of 26, Donny was a has-been, and to cap it all he found out that all the money had gone.

Donny describes this period as his lost years and in an emotionally charged interview with Piers Morgan, Donny tearfully recounts the professional rejection, his lost childhood and the financial turmoil that he’s had to overcome.

You Can’t Fire Me, I’m Famous- Donny Osmond
Broadcasting On BBC One On Tuesday 2nd October At 10:35pm
bbc.co.uk/bbcone