DJ Yoda is one of Britainâ€™s most admired and original DJs, having built a reputation as the only DJ to single-handedly inject humour into UK hip-hop. Admired for his originality as well as his sense of fun, he is possibly the only DJ in the world who can fill a club cutting George Formby with Jurassic 5, or 80â€™s pop with New York rap.

Tipped by Q Magazine as one of “The 10 DJs you must see before you die”, and voted alongside DJ Premier as “One of the Top Three DJs in the World” in Hip Hop Connection magazine, DJ Yoda is no ordinary scratch DJ.

Born in London, Yoda represents a new brand of mix-master who will play any kind of music to make people dance – with a hip-hop set that can take the audience from underground rap to TV themes, to nursery rhymes, country, soul, reggae, drum and bass, 80â€™s pop and back again. 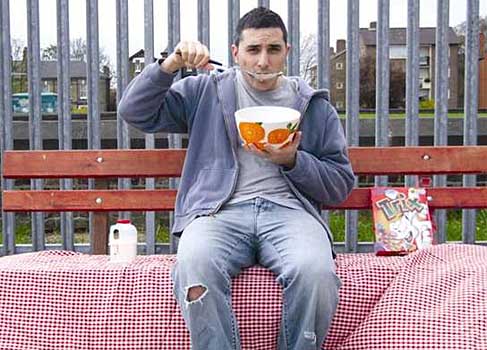 In the last year few years, DJ Yoda has played on the same bill as Steve Martin, Dave Chappelle and Chris Rock at the HBO Comedy Festival in Las Vegas, headlined the Lake Of Stars Festival with Basement Jaxx in Malawi, Africa, performed alongside the likes of Amy Winehouse, Mark Ronson and Fatboy Slim, headlined at a Star Wars film premiere in front of George Lucas himself, at the Grand Prix in Monte Carlo, and hosted an hour long mix show for BBCâ€™s Radio 1 to celebrate their 40th Anniversary.

Separate to these dates, he has also been touring internationally with an audio-visual show, boldly stepping where no other scratch DJ has been before to cut up DVDs live in the club. This came about after his successful re-scoring of both “The Goonies” and “Ferris Buellers Day Off” on the festival circuit in 2003 and 2004. His latest ‘Magic Cinema Show’ is currently setting clubs alight across the world.

Leaving mixtapes aside for a while, Yoda also recently finally released his first artist album, â€œThe Amazing Adventures Of DJ Yodaâ€. On this, Yoda provided beats for the likes of Biz Markie, 2005 MOBO-winner Sway, Princess Superstar, Jungle Brothers, MC Paul Barman, and a host of other vocalists, and he wonâ€™t stop until he works with all the cast of Sesame Street on a turntablist DJ track.
FAD PRESENTS:
DJ YODA’S MAGIC CINEMA SHOW
+ JIM HARTE
THE STIFF KITTEN
FRIDAY 16TH MAY
10PM / Â£12 ADVANCE
TICKETS AVAILABLE FROM THE STIFF KITTEN BAR, ZAVVI (FORMERLY VIRGIN) AND ONLINE AT
thestiffkitten.com
shine.net