IT seems U105 breakfast star Maurice Jay is hiding a secret talent. Last week was treading the boards in West Side Story at the Grand Opera House in Belfast for the third time. Since the mid-80s Maurice has bagged himself a role in the show with over 100 performances under his belt and this year will be no different. 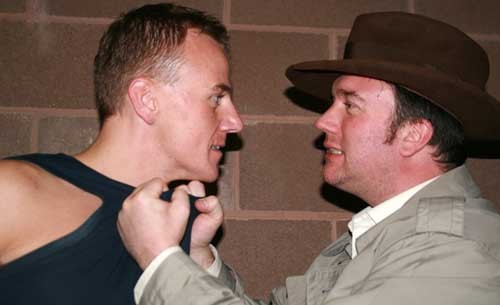 Maurice played Lieutenant Schrank (pictured here in costume) and told FAME: â€œI performed in the show here for the first time in 1986 and it was a bit intimidating – with James Nesbitt starring and a host of other well-known actors in the castâ€.
Unfortunately for Maurice as he gets that little bit older his roles have begun to change.
He added: â€œWell, I no longer get offered the part of Maria. Maybe my middle-age spread doesnâ€™t lend itself to the demanding choreography anymore, but a non-dancing part this time suits me just fine.â€
The Ulster Operatic Companyâ€™s West Side Story wrapped to a standing ovation at The Grand Opera House, Belfast last Saturday nightÂ  but Maurice added that it wouldnâ€™t be the last time he would appear on stage.
The radio star hopes to return soon and hasnâ€™t ruled out another role in West Side Story in the future.
by Tina Calder
Â©FAME Inc