The Red Stripe Music Award, the UKâ€™s widest search for the best unsigned music talent, reaches its climax on Monday 12 May with four finalists from across the UK vying it out for the Red Stripe crown, playing alongside the headliners, Dirty Pretty Things. 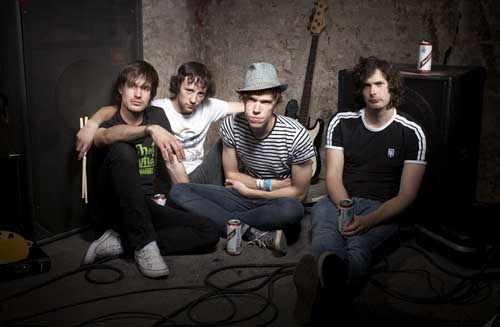 After 52 showcase gigs, in 32 different towns and cities, and performances from over 200 bands, Red Stripe reps have scoured the country for the very best of the UKâ€™s undiscovered talent. And now the line-up has been whittled down to just four bands who will fight it out for the coveted title of winners of the Red Stripe Music Award 2008.

The finalists are:
The Down and Outs â€“ Like Vampire Weekend, The Down and Outs know how to make a melody that wraps around your life, itching the sun-loving inner Beatles fan with a vocal jumble of lyrical whips so sharp they pierce the British weather with massive beams of musical sunlight.

Kiddo â€“ This Edinburgh four-piece makes music so mischievously charming youâ€™re as carried away on their songs as you would be Good Shoes or dare we say, The Cure. Uber-catchy pop songs, delightfully delivered with a refreshing sense of on-stage cohesion.

Klaus Says By The Record â€“ This Brighton based songsman is already renowned for his elastic live show, the rousing poet combining the utterly pop with the fantastically theatrical. His Jamie T spliced with Paul Heaton manner is a jocular and whimsically lyrical feast of menacing adolescent excitement with well-nourished flashes of Get Cape Wear Cape Fly.

O Fraccas â€“ Weâ€™re still not a hundred per cent sure how to pronounce their name, but we do know that they make a different sound to most other bands in the UK. From the outlandish catchiness of their weirdo dark-pop to the undertone of vaudevillian vocals and pianos, they meet the oddball with the custom and make it sound belligerent.

High profile industry tastemakers â€“ Stuart Clark from Music Week, Oli Hodgson from Coda and Will Kinsman from The Fly, will be making the final decision on the night, which will see one band being given the opportunity
to play at two of the UKâ€™s best new festivals, The Great Escape festival in Brighton (15-17 May) and Lovebox Weekender (19-20 July), and their very own tour bus. Plus, there is the â€˜money canâ€™t buyâ€™ prize of exposure to some of the biggest names in the music industry.

Jonny Kirkham, one of the guys behind Red Stripe, says: â€œAny band that is starting out needs as much help as they can get, and as Red Stripe has been working in and around music for nearly 40 years, it is only right that we try to help local scenes develop.â€

In just two years, RSMA has doubled in size and with the support of headliners Dirty Pretty Things, RSMA is already earning itself a reputation.

Red Stripe has enjoyed a long and rich history with music. Where there have been guitars and the will to rock n roll, there has been the obligatory can of Red Stripe. From The Clash to Oasis to The View, British bands have worn their association with the Jamaican lager like a badge of honour, flaunting it on magazine covers and even on their own sleeve notes. Distributed through great live music venues, Red Stripe is name checked by bands like the Kaiser Chiefs and Massive Attack, and is requested at album launches by artists themselves.

Jonny adds: â€œThis isnâ€™t some rubbish battle of the bands competition. Itâ€™s an award that concludes 52 local showcases and weâ€™re proud to be able to give something back to bandsâ€™ fans by putting on a show for the final.â€

The Runners, who were crowned the inaugural winners of RSMA back in 2007, are already making headway in the industry. After winning the award last May, they have since released their first two singles, have toured throughout Europe and have played sets on Steve Lamacqâ€™s Radio 1 show. Lead singer, Gus Cox says: â€œThe last year has been manic. We’ve been touring allover the place, played gigs to thousands of people and appeared on Radio 1.

Red Stripe has really helped us out, not just by providing cans of the stuff, but by actually helping us to realise our dream. Winning the Red Stripe Music Award has opened so many doors for us that just wouldn’t have
been possible.â€

The Red Stripe Music Awards take place at the Kentish Town Forum and all the tickets are free. Fans can register for tickets now by going to redstripe.net