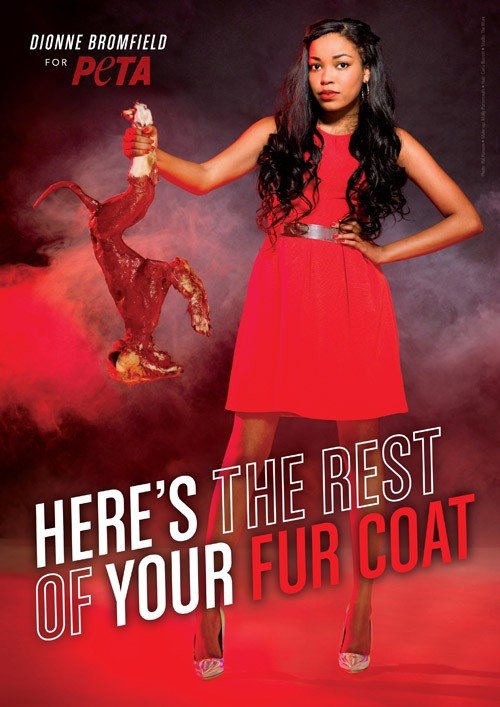 Ever since she shot to fame performing on Strictly Come Dancing, 17-year-old Dionne Bromfield has been known for her soulful voice, which is reminiscent of that of her late godmother, Amy Winehouse.

In her new anti-fur ad for PETA, Bromfield holds a bloodied, skinned fox and stares pointedly into the camera above the words “Here’s the Rest of Your Fur Coat”.

Donnie says: “Not only is fur cruel, it’s also totally gross, I mean, who wants to wear the skin of an abused animal? Not me! I watched one of PETA’s fur videos, and I challenge anyone who wears fur to watch it, too.

Seeing these terrified animals as they have their skin ripped off their backs just so that someone can walk around in a fur coat or hat really upset me, but it also inspired me to try to raise awareness about the fur trade.”

Animals on fur farms spend their entire lives confined to cramped, filthy cages before they are beaten, gassed or anally electrocuted. Sometimes, they are even skinned while still alive.

More than 2 million cats and dogs are skinned in China every year – many while fully conscious. Designers such as Ralph Lauren, Stella McCartney, Tommy Hilfiger, Calvin Klein and Vivienne Westwood have all publicly sworn off fur.