The first studio release in 18 years from the original line-up of J Mascis, Lou Barlow & Murph: â€œBeyondâ€ is finally here. And now the band have announced two shows this May – The Academy, Dublin on 12 May 2008 and Spring and Airbrake, Belfast on 13 May 2008. 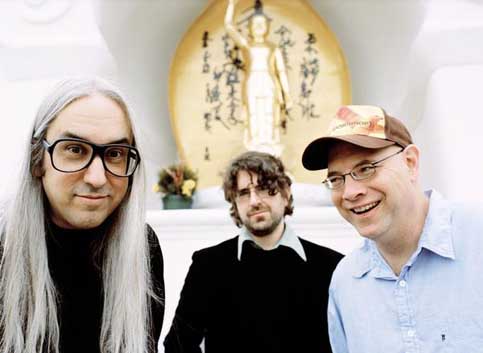 After recording three albums, â€œDinosaurâ€, â€œBugâ€ and â€œYouâ€™re Living All Over Meâ€ Dinosaur Jr. single-handedly moved the indie scene from the rigid ideology and rapid fire bursts of hardcore and post-punk into a new era of introspective yet no less powerful expression. After the release of â€œBugâ€ the original trio imploded.

Fast forward to 2005: a tentative reunion was undertaken to support the re-issues; a TV show here, a club appearance and some Japanese dates there. In the 16 years since the band had toured a lot had changed. The mix of influences and the sheer volume of the music were no longer a semiotic problem for fans, the band members had grown up and become stronger songwriters. The band curated their own day at All Tomorrowâ€™s Parties in May 06, and then appeared again at the Thurston Moore curated event in December, where they had to play two sets to accommodate the number of people that wanted to see them. â€œIt was almost like theyâ€™d been reborn as a hardcore bandâ€ says Kim Gordon ( Sonic Youth ).

The success of the live shows prompted the band to go into J Mascisâ€™s Bisquiteen Studios to write and record a new album, and â€œBeyondâ€ is the result. â€œBeyondâ€ is a monster of form. From the staggeringly paced guitar spew that opens â€œAlmost Readyâ€ to the classic soft/throb dynamism of â€œWhat If I Knewâ€, it is an exquisite slab of pure Dinosaur Jr. Itâ€™s hard to understand the alchemical relationships that exist within certain bands. Some groups can change line-ups without anyone noticing. But that was never the case with Dinosaur Jr. The pieces that fell away over the years were missed. But now they have all been collected together in one place. For how long no one can say. So just dig it while it is.

The full tracklisting for the album is: Almost Ready/Crumble/Pick Me Up/Back To Your Heart/This Is All I Came To Do/Been There All The Time/Itâ€™s Me/Weâ€™re Not Alone/I Got Lost/Lightning Bulb/What If I Knew.
dinosaurjr.com
myspace.com/dinosaurjr
DINOSAUR JR
With Support
TUESDAY 13th MAY
SPRING & AIRBRAKE
Doors 7pm (**EARLY SHOW**)
Tickets: Â£18.50
Tickets available from Katy Dalyâ€™s, Virgin & all usual Ticketmaster outlets
Credit card bookings & info: 0870 243 4455
Book online at
geturticket.com