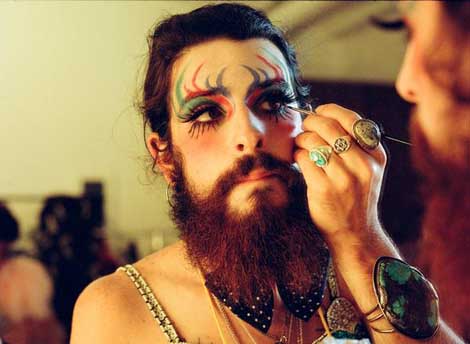 Devendra Banhart’s latest release is Smokey Rolls Down Thunder Canyon which was recorded at home in Topanga, CA throughout the Spring of 2007, co-produced by Noah Georgeson and Devendra. Banhart exploded on the international music scene in 2002 quickly winning a coterie of devoted fans as well as an unusually hefty amount of critical kudos right from the outset. The criticsâ€™ acclaim and the size of his audience both at home and abroad earned by his debut Oh Me Oh My The Way The Day Goes By The Sun Is Setting Dogs Are Dreaming Lovesongs Of The Christmas Spirit was impressive to begin with and increased dramatically with each subsequent release: 2004â€™s Rejoicing In The Hands, Nino Rojo and 2005â€™s Cripple Crow. Smokey Rolls Down Thunder Canyon is released world-wide by XL Recordings, hitting UK stores Monday 24th September. Devendra and band kick off an extensive European tour in August, playing both Green Man and Reading and Leeds Festivals in the UK.

The new album has a nocturnal feel with performances that respectively evoke hushed, twilight atmospherics or boisterous, late night partying. Thereâ€™s wide but natural stylistic breadth evident, running the gamut of gently crooned ballads like â€œBad Girl,â€ the loping Blues of â€œSaved,â€ epic rockers such as â€œSeahorse,â€ sprightly reggae tunes, sultry South American stunners like â€œCristobalâ€ and a few fun surprises mixed in for good measure. At the same time itâ€™s a more focused effort. Where Cripple Crow sounded like Devendra trading licks with a never ending caravan of passing musical gypsies, Smokey is very much the work of a band, Devendraâ€™s regular touring line-up strategically complimented by a few very special guests. The vocal arrangements are noticeably more intricate and ambitious with lush harmonies running through many of these numbers. The instrumental performances are comfortably loose but in-the-pocket a rich blend of acoustic and electric guitars, understated drumming and gentle percussion, diffident bass and a variety of downhome keyboards (venerable upright piano, Hammond B-3, sharp electric piano) subtly colored with the occasional lightest touch of strings or woodwinds.

Devendra Banhart was born in 1981 in Houston, TX then moved with his family to live with his grandmother in Caracas, Venezuela. When his mother remarried, the family relocated to Encinal Canyon in California where he first began to play music and learned to speak English. Devendra began making waves in underground music circles in 2002 with his debut album Oh Me Oh My The Way The Day Goes By The Sun Is Setting Dogs Are Dreaming Lovesongs Of The Christmas Spirit . Over the course of 2003, Oh Me Oh Myâ€¦ became a grass roots sensation attracting a passionate and rapidly growing audience as well as abundant praise from the likes of the Los Angeles Times, Arthur Magazine, LA Weekly, and Magnet among others. When Rejoicing In The Hands and Nino Rojo were released in Spring and Autumn 2004 respectively, Devendraâ€™s following became still larger and more zealous and two headlining tours packed venues across the country and overseas. Meanwhile, journalists on both sides of the Atlantic were unstinting in their praise of these two albums. The following year he recorded and released Cripple Crow to even greater overwhelming acclaim from Rolling Stone, Mojo, Sunday New York Times Magazine Harp and Paste among many others. He toured with his â€œHairy Fairyâ€ band filling large halls across the U.S. going on to play large, prestigious music festivals around the world including Americaâ€™s Coachella, and Bonnaroo. In February 2007 he headlined a bill at Carnegie Hall of friends and colleagues called â€œWelcome To Dreamlandâ€ curated by ex-Talking Heads David Byrne.

Devendra Banhart has emerged as one of the most fascinating, unpredictable and inspiring artists of his generation and with Smokey Rolls Down Thunder Canyon he continues to surprise and delight an ever-increasing audience of fans and critics alike.

Devendra Banhart Live @ The Village tickets are â‚¬25 and are on sale Thurs. Sept 20th @ 9am through Ticketmaster and all usual outlets nationwide.
www.aikenpromotions.com ;Booking Line: 0818 719 300.
www.myspace.com/devendrabanhart