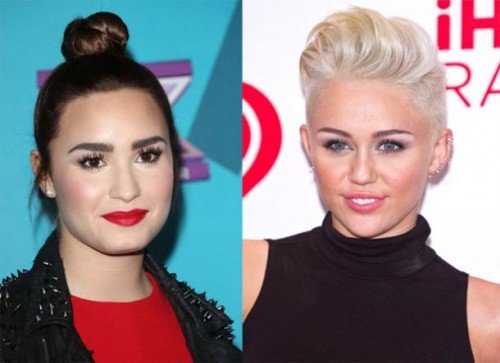 If you’re a fan of divas or Disney or both, then your Lisa Frank planners are already marked in Hello Kitty ink with the news that ex-Mickey Mouse singers Miley Cyrus and Demi Lovato have been invited to perform on the next “VH1 Divas Live” set to air this December 16.

Now you’re head is probably spinning with the possibilities the two could entertain on the stage, so before you lose your head on the image of a “Party in the U.S.A.” and “Give Your Heart a Break” mash-up live, we did you a favor and asked Demi if a duet was in the works for the two.

The nice people at Stereotude caught up with the “X Factor” judge and asked her straight up if they would do a song together and…it’s not happening! In the near future anyway, and the “Skyscraper” singer has a guess…

“I think she is busy with her fiancé,” Demi shared with Stereotude. “She’s got a lot bigger things to worry about, but I have always wanted to do a song with her!”

Well, at least there’s still the faint glimmer of hope that it could happen once Miley’s settled in following her ONE wedding—not three as rumored, otherwise then you could really kiss a DeMiley collaboration goodbye because the exhaustion of planning a trio of separate weddings would surely leave the bride-to-be times three out of breath.

The glamalicious Adam Lambert-hosted show (what he’s already predicting to be “the most fabulous concert of the year”) will have the two diva lites belting out notes with the likes of Ciara, Kelly Rowland, and Jordin Sparks who will honor dance music icons of the past and present. There’ll also be special segments dedicated to Donna Summer and Whitney Houston.
By Matt Dekneef
READ MORE stereotude.com