It’s fair to say that when Plastiscines, a fabulously grungy and gorgeous French, all-girl, rock band started out 4 years ago, they weren’t taken entirely seriously by their Parisian peers. There is no risk of that these days.

After the huge success at home with second LP ‘About Love’ produced by Butch Walker (Katy Perry, Pink) and their growing popularity in the US, after signing to Nylon Records, the label of trend bible Nylon magazine, Katty Besnard, Marine Neuilly, Louise Basillien and Anais Vandevyvere are the toast of the indie world.

Plastiscines formed when Besnard and Neuilly who were at school together, met Basilien at a Libertines concert. They learnt to play their instruments whilst gigging in and around Paris. “We never even changed our guitar strings,” admits Neuilly. Joined two years later by Vandevyvere, Plastiscines fast became leaders of les bebes rockers a new wave of teenage rock n roll sweeping through Europe. 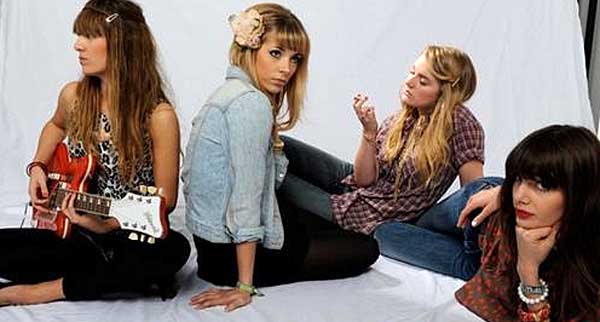 At just 17, Plastiscines were playing sold-out shows with the Hives, The Slits, Razorlight and Iggy Pop. Plastiscines may still be nauseatingly young – average age 21 but these sassy, punk-pop princesses album About Love is undoubtedly set to be their tour-de force.

‘About Love’ is more or less about love. It’s about relationships with your friends, your lover, your boyfriend. Opener ‘I Could Rob You,’ showcases singer Besnard’s husky, yet honey-dipped tones against a back drop of 70s garage rock riffery. Amazing what a French accent can do to the English language!

Second track ‘Barcelona’ is about an amazing after party the band once had, it was also was what propelled Plastiscines into the UK’s consciousness. ‘Barcelona’ flaunts their hook-laden, attention-grabbing style, with obvious nods to heroes Blondie, The Strokes and The Kinks.

Third track ‘BITCH,’ will be the B-Side to follow up single Another Kiss and was premiered earlier this month on hit TV series Gossip Girl. ‘BITCH’ is aimed at all the people who said Plastiscines were just rich girls put together.

‘Camera’ was originally written for Kraftwerk’s album Tour de France, Plastiscines ensured they kept the cult band’s two-chord style, with a guitar riff borrowed from ‘Brand New Cadillac’ by Neuilly. ‘Time To Leave’ is about the dream of leaving and starting afresh. It’s fun, furious and insanely catchy, plus like all great punk tracks it’s done in less than 120 seconds.

‘I Am Down Tonight’ is the only acoustic number on About Love and is a heartrending, confessional tale of a dysfunctional relationship. On this Besnard coos â€œI am down tonight because of you, I thought I was the only one, maybe for a day or maybe just a night. I couldn’t bear to have you off all the time, it’s not enough.

Another Kiss is the follow-up single due out 8th February 2010 and is a dirty badass, art-punk anthem about breaking up, executed by Kathleen Hanna sounding vocals. Another Kiss hasn’t changed since the day it was written and incidentally was the first song written for the album.

‘Pas Avec Toi’ is one of two songs entirely in French, have no fear you don’t need to understand French to get that these girls are pissed off.

Penultimate track You’re No Good sees the protagonist finally reach her bra burning, epiphany this guy is just no good. Feeling better now that we’re through, feeling better coz im over you. I learnt my lesson you left a scar, now I see who you really are. You’re No Good. Plastiscines decided they wanted to cover just one song on this album and agreed unanimously You’re No Good written by the late Clint Ballard JR, just made sense.

Final track ‘Coney Island’ is effortless bohemian cool, fittingly it’s about a place just south of Brooklyn where you can find just about every addiction going: television, alcohol, junk food, money, drugs. It’s an amazing place where you can forget your worries and have a good time. Everyone there is driven by their own weaknesses and hopes that the future is going to be better.