Death Cab For Cutie have announced a date at Belfastâ€™s St Georges Market as part of their forthcoming visit to Europe. The Washington natives will play on Wednesday 12 November. The band released their sixth studio album, Narrow Stairs, this summer.
Subsequently received favourable four star reviews from the likes of Rolling Stone Magazine, The Times, Mojo, Kerrang and The Guardian. After spending much of 2006 in the midst of a turbulent tour cycle surrounding their RIAA platinum, Grammy-nominated album Plans, the band took a well-deserved break during the first part of 2007. 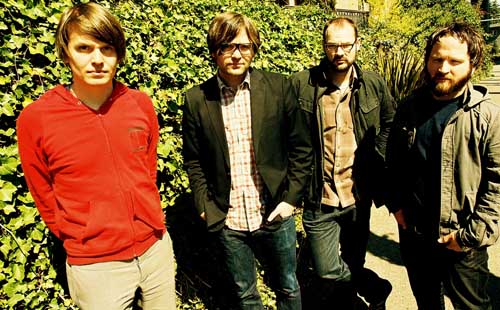 Front-man Ben Gibbard embarked on his first-ever solo tour; guitarist/multi-instrumentalist Chris Walla released a solo album and produced records for acts like Tegan And Sara; drummer Jason McGerr constructed his own recording studio, Two Sticks; and bassist Nick Harmer, as always seems to be the case, worked on various projects. If Plans was a collection of firsts â€“ Death Cabâ€™s first album for a major label; the first disc to feature songwriting contributions from someone other than Gibbard; the first Death Cab disc recorded with the same drummer as the one before â€“ Narrow Stairs feels more like home.