deadmau5 announced the release of a music industry first, a compilation album of his tracks available in a new release format, as a Remix App for the iPhone, iPad and iPod Touch – the deadmau5 Touch Remix App. 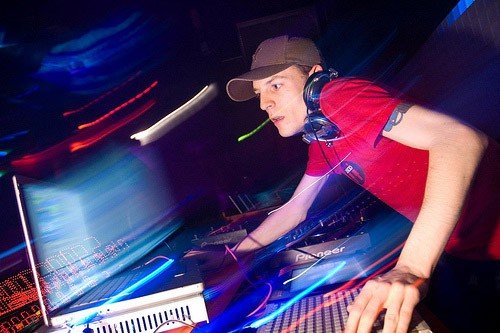 Music in its most pure form is just human communication. With deadmau5’s live shows and releases that communication, by its nature, is only one-way. He performs and fans listen.

With this remix-able album however that communication becomes a two-way road. People no longer just listen to the music, they can interact with it, change it and add their own creativity.Utilizing the multi-touch features of the iPad, iPhone and iPod Touch, the deadmau5 Touch Remix App is an innovative way for fans to interact with the music they enjoy and love.

It gives them an unprecedented level of control and customisation over deadmau5’s music, giving users the ability to remix their favourites.

They can freely take loops from different tracks and mix them together. Next, they can apply effects to their remix, adding their own creativity.

They can then Record their remix and share with friends on Facebook. Fans will also be able to enter their remix into a competition to win a custom, one of a kind deadmau5 iPad, loaded with all his music.We are in the age of the prosumer, where the lines between people who consume / listen to music are becoming blurred with that of the producers. This remix album App introduces fans to the joys of being creative.

Until now, technology did not permit this, but with the new generation of mobile touch devices, the work deadmau5 does on stage can now be recreated in a simpler form for everyone to experience.

Firmly established as one of the most innovative electronic live acts globally, deadmau5 has had an outstanding year. His driving foresight is constantly pushing the technological boundaries of his stage show.

Key Features:
* • A Remix-able compilation album of deadmau5 tracks.
* • The App is available for all iOS devices, iPad, iPhone and iPod Touch.
* • The loops/clips of the album tracks are presented in a remix-able format.
* • Freely take loops from different tracks and remix them. Add your own creativity to the music.
* • Apply music effects Delay, Low DJ Filter, High DJ Filter, Loop) to your remix, in the same way deadmau5 does on stage.
* • Move the device around to change the effects. Manipulate the music by movement.
* • Record you remix and share with your friends on Facebook.
* • Enter your remix in a competition to win a custom, one of a kind deadmau5 iPad, loaded with all his music.