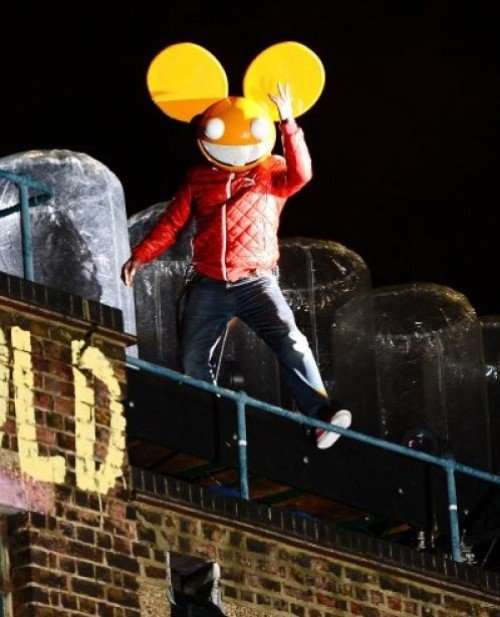 Canadian producer deadmau5 once again teamed up with Nokia for a secret gig in London. Taking over an entire square in Southwark, Nokia rigged every inch of it with lights for spectacular show which saw deadmau5 play songs from his new album ‘Album Title Goes Here’.

“On top of a building a solitary figure stands in the darkness before being lit by a spotlight.

The first line of a song plays, the crowd erupts.

The line is repeated and the bass swells, the music drives the animation of the buildings, like a massive radial EQ meter – the entire square, in every detail, is a canvas for the song.

The crowd are consumed by light and sound, creating an unforgettable moment…”

Exactly a year after Nokia created the biggest light show the capital had ever seen – a 4D projection that covered Millbank Tower- the mobile giant transformed an entire London square into an immersive audio-visual show starring deadmau5.

Nokia rigged every inch of Flat Iron Square in Southwark, using specially developed software, to come alive in sequence to a deadmau5 set. People arriving in the square saw just a normal London street, and as the music started the technology allowed it to be ‘played’ like a musical instrument.

deadmau5 said: “Playing Millbank Tower was an incredible experience, so it’s great to be back in London to team up with Nokia again.

The new show was a totally different concept from last year, but equally inspiring and technically challenging.”
Photos: Getty Images