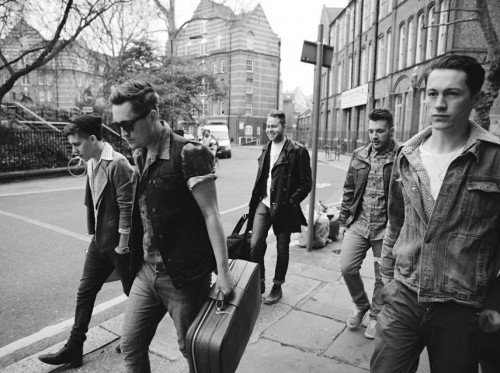 London five-piece band Daytona Lights have been making waves across the festival scene and supported ska legends Madness during their 2012 tour. They have also been busy making a new EP and this month see’s them release a new single ‘Midnight Beach’.

Hi, I must admit it’s rare for us to find a band who live up to their hype, but you certainly do. How did the band form and who decided the musical path to take?

Matt: Laurence, Dan, Sam and I met at uni and decided to start a band as we enjoyed playing and making music together. As a result of starting out for fun we just played what we liked the sound of; then since Lou joined about three years ago we began to hone in on the sound we have now.

Dan: The majority of us learnt our instruments as we went really. The path is something that was natural with all of us. I think this latest collection of songs began with strong bass guitar ideas and were layered up from there. We’ve never sat down and asked ourselves what musical path we wanna take.

That makes it too rigid and over complicated. If the tune is strong it’s in. It’s as simple as that. I’d say with these new songs there is definitely some XTC, and Chic flying about there somewhere. 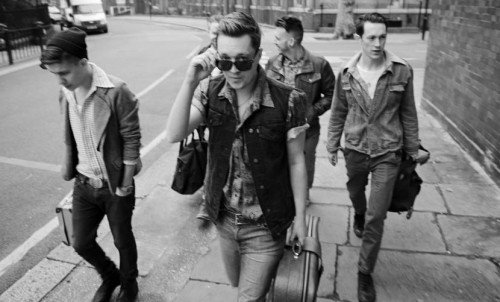 What can you tell our readers about the new single ‘Midnight Beach’ and the forthcoming EP?

Matt: The forthcoming EP goes down the vibe of ‘White Horses’ from our first album, spacious guitars with detailed harmonies. Midnight Beach is a funky one with elements of the vibe through-out it; it’s so much fun to play!

Dan: ‘Midnight Beach’ is named after a greyhound. The subject is kind of based on Barton Fink, A Cohen Brothers film.

Louis: I like to think of ‘Midnight Beach’ as a natural progression of the sound we had on our first album. It’s now tinged with that 70s sound which came about unwittingly from the records we were listening to at the time. I personally had rediscovered Nile Rodgers body of work and was fascinated by his notion of that the less you play, the funkier it is.

Although I like to think there’s a bit of Studio 54 meets CBGBs rather than just a straight up disco vibe. The EP is a slightly darker affair than our last record and we’ve experimented with trying to retain the feel good nature of our music while taking it into a more mature territory.

The most experimental track on the EP is ‘Submarine’ which has a four part vocal harmony chorus part followed by a bass solo… I mean, when was the last time you heard those one after the other?!? I think we got away with it though… ha. All in all we’re incredibly proud of the new EP. 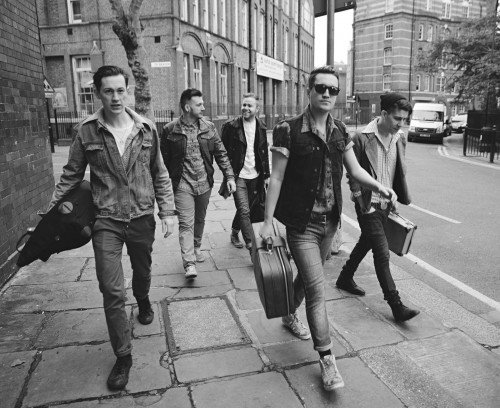 How does the band go about creating new material? Do you all have a say in what you write and subsequently release?

Matt: When it comes to writing the songs, what we write can come from pretty much anything, a guitar line, bass line, a line of poetry and drum beat, a chord progression and so on. Lyrically, I allow Dan to write all the lyrics because I wouldn’t want my front man not putting his heart and soul into it! Haha!!

In terms of release we always seem to land on the main bulk of songs together with only a few disputes, which we can generally sort out with minimal fuss.

Dan: Its collaborative yes; vocal melodies and lyrics are usually my role. There are always songs that you have that are personal favourite songs that still don’t make the cut for whatever reason.

But the feel of the EP was important to us this time round. It has some classic pop elements, but takes a darker approach with lyrics. It’s a collection of songs about saying goodbye as cheesy as it sounds.

Louis: We’ve developed different writing methods but I suppose we usually start with a jam in the rehearsal studio or a part/chord sequence that someone brings in. After working this up into a rough shape we’ll take it back to my recording studio and track a rough demo.

We’ll then pick this apart and rebuild it over time, periodically shifting between rehearsal rooms and the recoding studio until we get the song to a point at which we’re all happy. 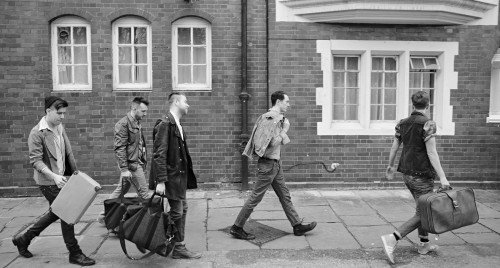 Your album ‘This Modern Landscape’ won the best album award at the Download Music Awards 2012. What did that award mean to you?

Matt: It meant a cracking night out! Glad to get recognition for our work, it means a lot when you put so much into it.

Dan: It’s nice to get recognition for something we worked so hard on. There are fond memories of working with Steve Levine. We love the innocence of that record. It was a record based on instinct not knowledge.

Louis: To be honest the award was a complete surprise. We went down to the ceremony mainly for the free drinks, totally not expecting to win. However halfway through beer number four, they announced our name… It was particularly important to us really because it was voted for by fans, which as a band are the most important people to us.

If you don’t have fans, you have no audience and no audience would mean a lot more out of work musicians!

There is a distinctly 80s vibe/sound running through your work. Is that an era that you as a band enjoy listening to?

Matt: Definitely, Aztec Camera, Orange Juice, Duran Duran… love it. Love the style of guitars on a lot of these tracks and some of the backing vocals are absolutely classic!

Dan: I love a good 80s front man. Andy Partridge, Edwin Collins, Roddy Frame. Kevin Roland. For me there’s something pretty special about pop in that era. There’s a song called Chimes on the new EP. That’s kinda like an ode to those people.

Louis: We’re all 80s babies so we all grew up around it I guess. We’re fortunate in that our parents introduced us to loads of great bands from a young age. Also, bands like Aztec Camera, Orange Juice and XTC are the intersection of our musical Venn diagram so it made sense that that came through in the music we began making.

That said, the new EP is influenced by records spanning from the 60s up to the 90s, not just that 80s feel.

You have worked with legendary Producer Steve Levine. He has of course worked with The Beach Boys, The Clash and Culture Club, among many others. How did you get him on board with your debut album?

Matt: Steve came down and saw us play in South London somewhere, he then kept tabs on us and gave us tips, then he asked if we wanted to work on an album with him, and we of course jumped at the chance. I really enjoyed working with Steve, he has such a passion about music and getting it right, he’s like an excited child in a sweet shop over the smallest thing which is inspirational when it comes to recording an album.

To have someone who is just as excited as you are, even though they’ve done it so many times before, is a blessing! I remember when we were in his home studio once; we shared a special excited moment over a label machine! Much to Louis’ disgust!!

Dan: We followed him about until he worked with us… He liked one of our demos ‘At Least I Know I Tried’. Next thing we were in Metropolis Studios recording it. I have got to meet and record a tune with Boy George through meeting Steve.

There was talk of it being released. But he hasn’t got in touch recently. Brian Wilson is also a hero so it was great hearing first hand stories about him.

Louis: Working with Steve was an absolute privilege. Anyone who has met Steve will tell you of his wealth of knowledge, experience and stories. Boy, does he have stories!!

Steve basically taught us how to make records and I applied so many of his production tips and tricks to the new EP, that he might as well have been sat at the console with me!! Although we don’t work with Steve anymore, we wouldn’t have been able to make this EP without what we learned from him. We salute you, Mr Levine.

What does the rest of 2013 hold for you as a band? Have you any tours etc lined up?

Matt: Yeah, buddy. We will be touring our EP early this year which is very exciting and something we are all looking forward to. After doing a university freshers tour end of last summer, and then hibernating in the studio to get the new EP sorted, I’m itching to get back on the road and start playing the new stuff to people.

Louis: We’re touring the UK in April with 10 or so dates in support of the new EP and should hopefully be confirming festival slots in the coming weeks.

Dan: Tours, festivals, writing with Daytona Lights. I found some aftershave in a pound shop the other day named ‘Midnight Heat’. So I’m thinking an aftershave range now…

What about new material. Is there another album in the pipeline?

Dan: There is plenty material. Don’t worry about that.

Louis: We’re always working on new material and aim to have more tracks out before the end of the year.

Finally what do you London boys do to relax after a gig? Have you any hobbies or rituals you do?

Matt: First things first, I am not a London boy! Haha! I’m from Manchester, and as a post-gig ritual I like to beat up Londoners, mainly Louis… only Louis. Then have a cup of tea.

In all seriousness I like to run away and get some fresh air right after a gig, I always feel like I need to calm down a bit and stop sweating, then go back and get drunk, as I don’t drink before we play so have to make up for it afterwards!

Dan: We usually have a few beers and talk about the show, particularly if we’ve done any new songs. Go on our merry way on stroll off into the night.

Louis: I don’t have any rituals anymore sadly; the boys might have secret ones… I’m guessing Loz does. After shows we return to our night jobs as masked vigilantes sworn to protect the streets of London… okay, that’s bollocks.

Laurence: I do have loads of personal rituals before a gig. I’m quite a superstitious person, but they are secret ones which don’t mean anything; everything from socks to picks.
©FAMEMAGAZINE.co.uk
Photos by Samuel Bradley.jpg