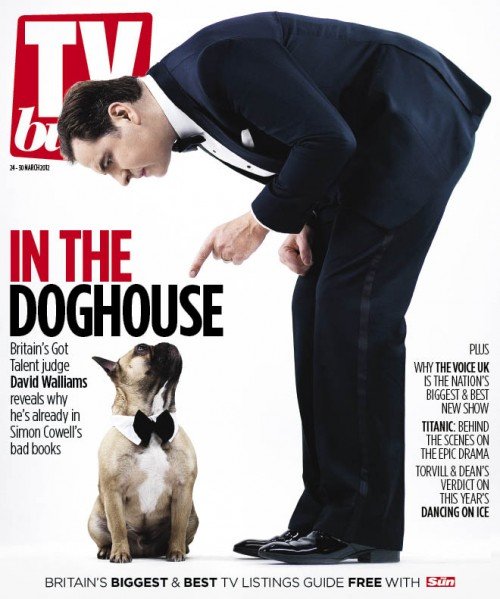 TV Buzz Magazine from The SUN had a chat with Britain’s Got Talent judge David Walliams.

Simon Cowell invited David to join him, Alesha Dixon, and Amanda Holden on the judging panel. “I asked for some guidelines before the show started,” says David, “and everyone was too scared to admit whether I was allowed to take the mick out of Simon. I just wanted to make sure he wasn’t sensitive about certain things. He was engaged [to make-up artist Mezhgan Hussainy] and now he’s not – so if that’s something that’s incredibly upsetting for him, you don’t want to make a joke out of it.”

How understanding! “But on day one of the auditions, the first act came on and I asked them what their dream would be.

They said: ‘I’d really like to perform in front of the Queen’ so I said: ‘Well, here he is – go ahead!’ The audience laughed. And Simon laughed. And the producers laughed. So I thought: ‘This is gonna be fine, this is gonna work.’”

Since then, there’s been no stopping him. “Simon does keep saying to me: ‘Look I’m not the Prime Minister in Little Britain’ – because every time he enters the room I act a little giddy,” says David. “I keep inviting myself over to his house. He said I can come round and watch The Empire Strikes Back with him, but that hasn’t happened yet.

We recently had to make a short journey from one of the auditions to watch an act perform outside. I said: ‘Please, please, please can I come in your Rolls Royce?!’ But he wouldn’t let me. I also lap-danced for him but he didn’t seem to enjoy it!”

David reveals to TV buzz: “I am fascinated with Simon. Alesha and Amanda are strong women who don’t let him get away with anything, but I’m under Simon’s spell – almost everything about him is fascinating. When I come home from work and see my wife Lara [Stone], all I ever talk about is Simon.

He gave me some of the special bath milk he uses. He often goes home and has a bath between shows and smells lovely. So I bathed in it – it was like I was Simon for a day! Lara was completely unimpressed.” Not too surprising!

With the addition of David, it looks like the BGT judging panel are going to be enjoying themselves this year; but does Simon ever join in the fun? “Oh yeah,” says David.

“When Lara came to the show and a blonde drag act came on, all Simon was interested in was trying to point out how similar the two of them were.”

He reveals: “He likes playing game. We’d often start late during auditions, though it was never to do with me. But Simon would tell the audience: ‘We’re running late because David was eating a three-course meal and said everyone can wait until he’s finished his dessert!’ So they’d all boo me! It’s not true, but they don’t realise he is lying. That, to him, is fun.”

The comedian reveals: “He likes teasing, but it’s never bullying. We had this running joke that Alesha was evil. Between acts, when the audience couldn’t hear us talking, Simon would say something like: ‘Ooh, did you see Alesha with that group of orphans earlier?

She said they couldn’t look at her!’ and I’d go: ‘Oh yeah, and did you see her when that child came in with a wheelchair and she let down their tyres?!’ We did that all day to entertain ourselves. Alesha, to her credit, took it with good humour.”

This series has already had its fair share of controversy – from the moment Simon poached Alesha from Strictly Come Dancing.

“I think I was more nervous than Alesha on the first day,” says David. “Alesha had been a very successful judge on Strictly, while I’d never done anything like this before. But I have watched BGT religiously over the years. Lara and I both cried last year watching Ronan Parke singing that Adele song [Make You Feel My Love].”

All thoughts of work were pushed aside when judge Amanda nearly died while giving birth to her daughter Hollie, in January. “We were all very worried for Amanda, but she’s a real trouper,” says David.

“When we came back to the auditions in Edinburgh she was amazing. She wasn’t tired at all and we got to meet baby Hollie in Birmingham. Amanda even let me feed her – with a bottle, of course!” Could a baby be on the cards for David and wife Lara?

“I’m sure we’ll have babies at some point,” he says. “And TV buzz readers will be the first to know. Though when we do, I think we’ll both take some time off. I’d want to do that because you’ll never have that time with your baby again.”

David swam the length of The River Thames for Sport Relief; he reveals: “I’m very disciplined when it comes to sporting challenges. You can’t pull those off unless you do absolutely everything your trainer tells you to.

I swam thousands of miles while training for both the Channel and the Thames swims, and it was that self-control instilled in me by Dad that helped me do those incredible things.”

Lara and David have made one addition to the household, a puppy named Bert. “He’s gorgeous, we are very proud parents.” Of course, BGT fans know that Simon is a sucker for talented dog acts, so has he struck luck this year? “We haven’t had a lot of dogs this series,” he says.

“But Simon loves animals and is always talking about them. I said to him: ‘You’re like Hitler. He liked dogs.’”

He adds: “Simon said: ‘You’re comparing me to Hitler now?!’” This series sounds like it is going to be fun!
Read more in TV Buzz Magazine from The SUN
facebook.com/TVbuzzmag