EMI Marketing will officially release David Bowie, Live Santa Monica â€™72 on June 30th. Recorded at Santa Monica Civic Auditorium, Los Angeles on October 20th 1972 during the first leg of the Ziggy Stardust US tour, over the last 36 years this historic recording has only been occasionally available as a bootleg.


For many, ownership of this concert was regarded as a true test of being a â€˜proper Bowie fanâ€™. This powerful, galvanizing show allows a more than 70 minute glimpse into the earliest nationwide live radio exposure granted David and the Spiders. 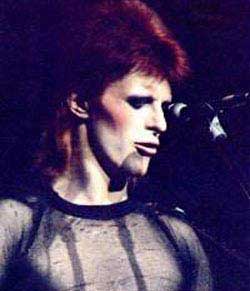 This is David Bowie at the pinnacle of his creative power â€“ in 1981 NME critics called it, â€œ(quite simply) … the performerâ€™s, and one of rockâ€™s, best ever bootlegsâ€.

The CD will initially be released as a limited edition with special packaging featuring shots taken at the actual gig for the first time. The double LP album set will be a numbered limited edition on 180 gram heavyweight vinyl.

David Bowie says:
â€œI can tell that Iâ€™m totally into being Ziggy by this stage of our touring. Itâ€™s no longer an act; I am him. This would be around the tenth American show for us and you can hear that we are all pretty high on ourselves. We train wreck a couple of things, I miss some words and sometimes you wouldnâ€™t know that pianist Mike Garson was onstage with us but overall I really treasure this bootleg. Mick Ronson is at his blistering best.â€
Live Santa Monica â€™72
Released 30th June 2008