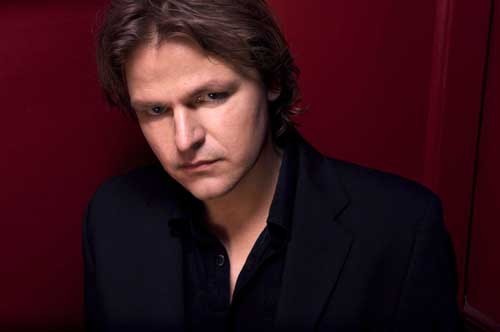 Meet Tom Mcrae â€“ a British-born singer/songwriter whose intelligent song craft and remarkable vocals are steadily propelling him into sharp focus around the world.

Influenced by contemporaries that include Bruce Springsteen, Nick Drake, Nick Cave & the Bad Seeds and Jeff Buckley, â€˜King Of Cardsâ€™ is Tomâ€™s recent album, and his most accessible work to date.

The story began in 2000, when Tomâ€™s eponymous LP received triumphant reviews across the board and won nominations for both the 2001 Mercury Music Prize and the 2001 BRIT Award for Best Newcomer. A truly impressive arrival, it sparked an awakening of public interest and deftly set the tone for his luminous future.

The equally impressive second album ‘Just Like Blood’ followed in 2003 and was produced by Ben Hillier, whose credits include Elbow, Martha Wainwright and Blur. Marking a steady progression in sound, scope & style, it witnessed an adventurous return to form and cemented his reputation as one of the UKâ€™s most important new talents.

Following its release, Tom left London for Los Angeles. With two celebrated albums under his belt, he cast his net wider and contributed to the film soundtracks of â€˜Unoâ€™ (2004) and â€˜Unsuitableâ€™ (2005) before beginning work on â€˜All Maps Welcome’, his third album, which was recorded and released in 2005.

â€œAll my records have been personal. Theyâ€™re literally postcards to remind myself where I was and what I was thinking at a certain time,â€ says Tom. â€œFor me, each one has to be slightly different, even if it means leaving your comfort zone and trying something unfamiliar. The last two records have been made in houses, which we converted into makeshift recording facilities. The same applied to â€˜King Of Cardsâ€™, which was recorded in a Suffolk beach house.â€

Written by Tom McRae and produced by Sean Genockey (Manic Street Preachers, Kula Shaker, Suede) the recent LP is centred round escape, identity and disappearance. â€œI wanted to lighten up a bit with this recordâ€¦ Iâ€™d been listening to a lot of hopeful, uplifting music and I thought Iâ€™d have at least one go at trying that myself.â€

â€œMost of my records are a reaction to the one before, and I was in a pretty dark place when I wrote the last one. This time I was in New York getting distance from everything Iâ€™d done previouslyâ€¦ and just letting the songs come out as they happened. Eventually they found me through the maze.â€

Album highlights include the forthcoming single â€˜Bright Lightsâ€™ with its infectious, crescendo chorus; the Dylan-esque heartbreak of â€˜Deliver Meâ€™; the shimmering, uplifting chords of â€˜Sound Of The Cityâ€™ and â€˜The Ballad Of Amelia Earhartâ€™ – a vibrant, lyrical masterstroke.

â€œFor me, writing songs is more about fitting in the time to live, in order to have something to write about. Music has never been an end in itself for me, itâ€™s my way of entering the world and interpreting it in a way I can digest and regurgitate as songs. Nothing beats the feeling of writing a song, and performing it to an audience. Recording is like trying unsuccessfully to pin a butterfly to cardboard. Playing live is like helping it soar into the rafters.â€