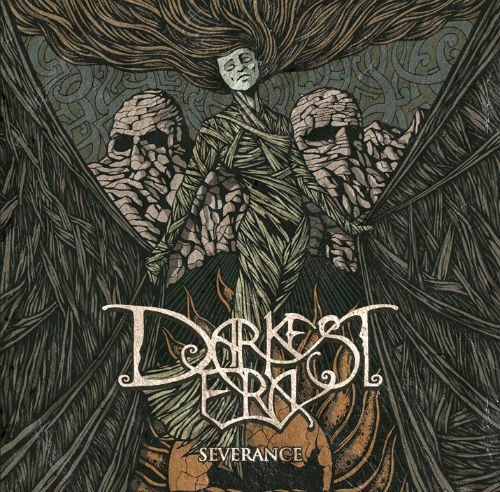 Fermanagh metallians Darkest Era have revealed the cover artwork for their long awaited new album, Severance, which is released on June 13 via Cruz Del Sur, to whom the band signed earlier this year.

The artwork was created by the Romanian illustrator Costin Chioreanu, who also has worked with the likes of At the Gates, Possessed, Ihsahn, Arcturus, The Devil’s Blood, Aura Noir, Deicide, Ulver, Grave and many others.

DE guitarist Ade Mulgrew said of the cover: “We are really pleased with the artwork which totally captures the atmosphere of this album. Costin has a unique style and immediately got what we were looking for.”

Speaking about the album itself, which was recorded at Data Recording Studios in Ballyheigue and co-produced by the band and Chris Fielding, Ade added: “Severance was recorded during what was a pretty stormy time in the band and against the backdrop of some very atmospheric natural scenery in one of the remotest parts of the west of Ireland. I think all that certainly comes across in the music and we are looking forward to finally unleashing it this summer.”

Severance will be released on June 13 in Europe and June 3 in the US on Compact Disc/ Vinyl / Digital.