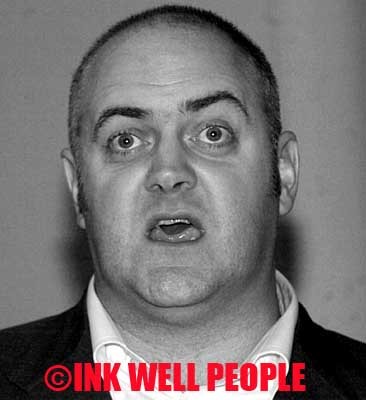 Photo by Fabrizio Belluschi
“If you don’t laugh at O Briain, check your pulse, you must be dead”
(Bruce Dessau, The Evening Standard)

Dara O Briain is the biggest Irish comic to have hit the UK in recent years. Already a huge star in Ireland where he produces and presents the hit TV live comedy review show The Panel, Dara has now moved from being a sold-out festival favourite in Edinburgh to selling out theatres across the UK and mainstream television success.

â€œO Briain is phenomenalâ€ (The Stage); â€œA masterclass in intelligent stand-upâ€ (The Guardian); O Briain remains one of the best no-frills stand-ups in Britain (The Telegraph); O Briainâ€™s solo shows just get better and better (The Observer)

At the start of 2003 Dara was chosen by the BBC to front their Saturday night comedy showcase, The Live Floor Show, which directly led to a series of acclaimed appearances as guest-host of the legendary Have I Got News for You, where both The Guardian and The Sun described him as “the best guest host yet”.

The basis for this success is Dara’s place at the very top of the stand-up circuit. Winner of the Chortle award for â€˜Best Headline Actâ€™ in both 2003 and 2004, Dara has performed virtually all over the world, from Dubai to Shanghai, and at all the major festivals from Melbourne to Montreal. He has performed at the world famous Just for Laughs Festival Gala, and last year he appeared in the UKâ€™s ultimate showcase for entertainers, The Royal Variety Performance.

Dara has also developed an enormous reputation as host to award ceremonies and corporate events, for evenings as diverse as the European Advertising Awards in the Grosvenor Hotel’s Great room, to the Irish Rock and Pop awards, held in the Point depot in Dublin, in front of 5,000 people.

Dara continues to keep busy. Both his UK tours in the past 2 years were completely sold-out with plans for his next tour this November. He is currently hosting a forth series of the Panel for RTE (made by his own production company Happy Endings) and his brand new topical comedy show for the BBC, Mock The Week.

â€œOne of the biggest and best comics in the countryâ€¦Real class.â€ (Irish Times)

“An excellent show, drenched in truth and intelligence, by a comedian
at the top of his game” (Metro)