Danny & The Champions Of The World release their new album ‘Hearts & Arrows’ through SO Recordings on 18th July. 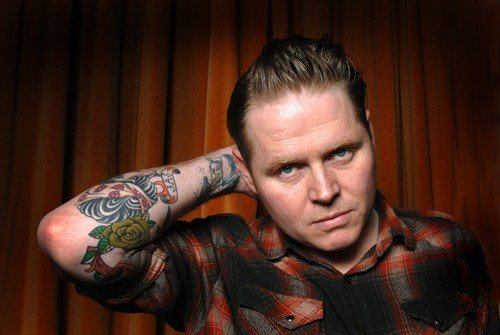 Danny & The Champions Of The World – Ghosts In The Wire by SoRecords
The follow-up to last year’s acclaimed ‘Streets Of Our Time’, the album was produced by Tony Poole and mixed by Ted Hutt (Gaslight Anthem, Lucero).

Featuring an entirely new Champs line-up, the band will preview new material at The Borderline, London on 8th June.

“On the back sleeve of the new record, I’m holding a Stratocaster,” grins Danny Wilson. “A friend saw it and said, ‘Woah, a Strat… Controversial!’ Yeah, too fuckin’ right! I wanna play a Strat, and I wanna plug it into a valve amp, and I wanna play music with my friends, and we’ve got a sax in the band, so let’s have a party. We can play all night, if you want. That’s what I love.”

“I love folk music, I always have,” Wilson says. “But I’m so fucking bored of ‘new folk’, and the trendiness that surrounds it, everyone pretending that it’s 1971 again. I wanted to make a totally un-bearded record. My reference points were Black Flag and Bad Brains, Tom Petty and Thin Lizzy, not Nick Drake and Sweetheart Of The Rodeo. Forget 1971, this is 1976: Dr Feelgood, Nick Lowe, just great rock’n’roll.”

The album was produced with Tony Poole, once guitarist with Starry Eyed And Laughing, mid-70s rockers of a kin with Nick Lowe and Brinsley Schwartz, and a man Wilson describes as “a genius guitarist, who comes from a time when the Hippy-ness of music was coming to an end and pub- and punk-rock was rising up. I went back to the source of the sound I was after with Tony.”

The album was mixed, meanwhile, by Ted Hutt, former member of Flogging Molly now better known as one of LA’s most in-demand producers, his CV including key releases by Lucero and Gaslight Anthem. “Ted’s a punk-rock guy who’s well into his Springsteen and his Tom Petty,” grins Danny. “He brought an edge, and an urgency, to the record.”
ALBUM ‘HEARTS & ARROWS’ 18th JULY
THE BORDERLINE WEDS 8th JUNE
thechampionsoftheworld.org
facebook.com/pages/Danny-And-The-Champions-Of-The-World