On Friday 5th September 2008 PLANELOVE WKD will host none other than Tiesto in Concert, and his â€˜In Search of Sunrise Tourâ€™. The worldâ€™s biggest dance music star Tiesto last appeared in Northern Ireland in March 2007 for a Kingâ€™s Hall show that sold out within a fortnight of going on sale.

His concert shows have seen him transformed from a famous DJ to an international superstar and household name! 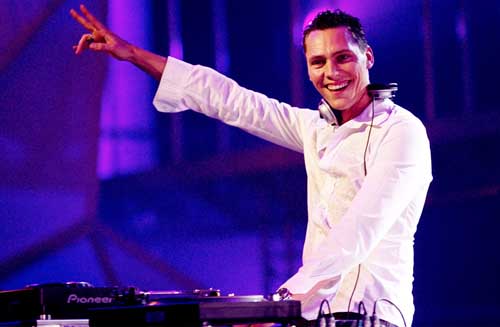 tiesto.com
Ten years ago, on the western banks of Lough Neagh, something very special happened.

A couple of thousand dance music fans gathered for what was Northern Irelandâ€™s first outdoor music festival and to witness a handful of international DJs, some national DJs and many local DJs perform at the very first Planetlove.

Ten years on, many thousands of people more and appearances from almost every celebrated DJ and dance act around the world later, and PLANETLOVE has become Irelandâ€™s biggest and most celebrated dance music brand, and along the way, has intrinsically shaped the electronic music scene of Ireland.

This year PLANETLOVE WKD celebrates its tenth anniversary â€“ and as anticipated, and hoped for, and debated by many people for many years â€“ the event will be nothing short of spectacular.

For the first time ever, PLANELOVE WKD will be held over two days, at Shaneâ€™s Castle, County Antrim on Friday 5th and Saturday 6th September and will include a full campsite.

On Saturday 6th September 2008, PLANETLOVE WKD the full – and impressive – line up for this will be unveiled on June 6th at Planetloveâ€™s official website planetlovemusic.com.

And yet more good news is that BBC Radio 1 will once again be present and broadcasting from the event, and also for the first time, concert-goers will be able to camp at Shaneâ€™s Castle.

PLANETLOVE is the creation of husband and wife team Eddie Wray and Judith Farrell-Rowan and their Lisburn based company PLM Promotions.

â€œThis is the most exciting festival that we have worked over the last ten years,â€ said Eddie Wray. â€œItâ€™s the first ever weekend event that weâ€™ve run, with a star-studded line up, camping and with birthday and production surprises. Ten years is certainly a milestone in the music industry and hopefully the experience we have gained will be reflected in this very special party.â€

Judith Farrell-Rowan added, â€œWhat a thrill this is for us to finally reach this landmark date! We have been planning our tenth anniversary celebrations for a few years now so the end result will be very special indeed. Weâ€™re really proud to have brought Planetlove this far and September 5th and 6th will be the culmination of everything weâ€™ve ever done to date.â€

The extent of the plans for the 10th Anniversary Planetlove WKD weekend event has necessitated two launches!

The second will take place online on Friday 6th June, with Planetlove WKD unveiling the full line up and arena breakdown of the festival on September 6th.

TICKET INFORMATION
A limited number of Early Bird weekend tickets went on sale on Saturday 24th May from planetlovemusic.com/shop ; and independent ticket outlets across NI, priced Â£85 (+booking fee, includes Friday and Saturday admission, plus free camping and car parking. NB. Early Birds can not be later upgraded to VIP).