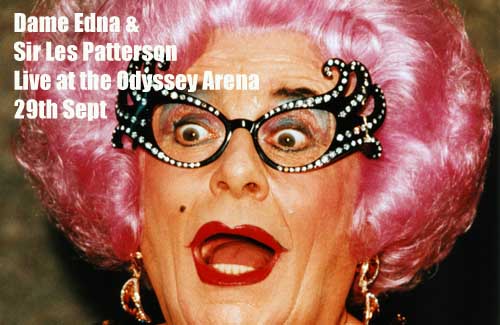 Australian national treasures Dame Edna Everage and Sir Les Patterson are going on a nationwide tour for the first time in 28 years. 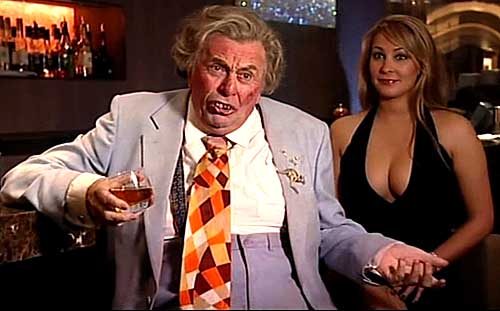 Dame Edna Everage has been one of the most idolised and admired women in show business for many a year. Famed for her catchphrases such as “Hello Possums” and “Call Me Old Fashioned”, Dame Edna soon became TV’s most loved housewife.

Still in 2009 she holds this regard amongst the worlds public, and has become the face of leading make-up brand M.A.C. Cosmetics. From sell out world tours to hit TV shows, there is no denying Dame Edna is a natural born star! 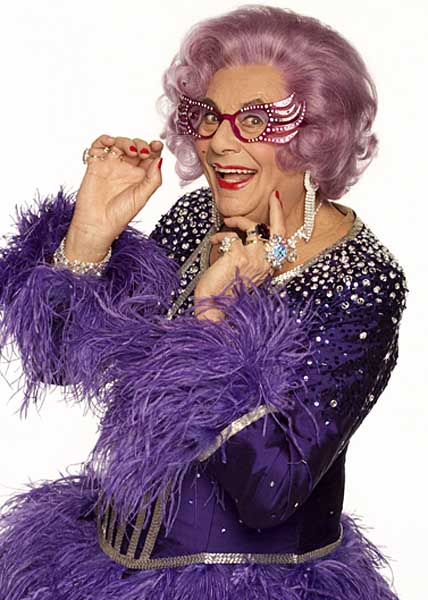 Sir Les is a politician by trade and has had many important and influential roles for his native country, these have included Chairman of the Australian Cheese Board, Minister Of The Yarts (arts) and Minister for Sport with special responsibility to keep sports rampantly heterosexual and “blokey”.

This time in a different guise, Peter is a bronzed surfer played on a piccolo trumpet, his friend is now a laughing kookaburra played on a soprano saxophone, and the duck has become a duck-billed platypus whose pleasant theme is played on the bassoon!

Carl Davis CBE has composed all of the music, and will be conducting the orchestras that will be the back-drop to all of Dame Edna Everage and Sir Les Patterson’s performances. Carl Davis CBE is a world-renowned composer and conductor, he believes that all music has an important place in the world, and this is reflected in the diversification of his concert programming.

He has worked on numerous film and TV scores, that included Chaplin’s Mutuals’ (12 short films), released numerous best selling CD’s and DVD’s, as well as composing and conducting music for special events such as the 150th anniversary of the Royal Liverpool Philharmonic Orchestra, where he worked with Sir Paul McCartney to write â€˜Paul McCartney’s Liverpool Oratorio’.

Carl Davis CBE…
“This unique collaboration between myself and Barry Humphries was written as a parody on the Proms. Barry and I have waited 28 years to do this concert again, Dame Edna and Sir Les never disappoint.”