The legendary trio Crosby, Stills & Nash (CSN)–David Crosby, Stephen Stills, and Graham Nash–will tour the western United States in late spring, followed by concerts across the U.K. and Europe this summer. Additional U.S. dates in late summer, following the group’s return from Europe, will be announced in coming weeks.

The tour’s first leg in the U.S. kicks off with a pair of festival dates in California: May 21 at the Sonoma Jazz Festival in Sonoma, CA, and May 23 at the Doheny State Beach Festival in Dana Point. Other highlights from the spring itinerary include two dates at Humphrey’s in San Diego (May 25-26), Red Rocks Amphitheatre in Morrison, CO (June 2) the Dodge Theatre in Phoenix (May 29), Portland OR’s Amphitheater at Clark County (June 11) and the Seattle area’s Chateau Ste. Michelle Winery (June 12). 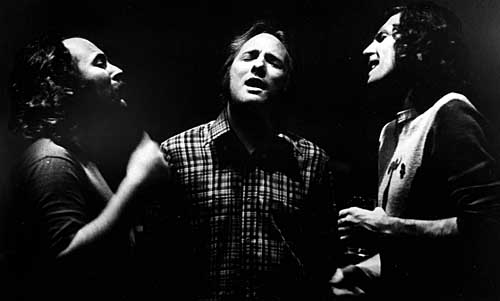 The tour’s second leg commences in the U.K. on July 1 with a concert at The O2 in Dublin, Ireland. Other European highlights include two dates at London’s Royal Albert Hall (July 3-4), Queen Elizabeth Auditorium in Antwerp, Belgium (July 9), The Olympia in Paris (July 12-13), and the Tollwood SommerFestival in Munich, Germany (July 25). Additional European dates will be announced shortly.

The group’s 2010 touring schedule follows up a twelve-month period marked by a number of high profile performances and projects. Most recently, CSN was a featured part of the all-star tribute to Neil Young – their longtime partner in Crosby, Stills, Nash & Young – at NARAS’ 2010 Person of the Year gala honoring Young that kicked off this year’s GRAMMYÂ® weekend festivities.

In October 2009, CSN played at historic Rock and Roll Hall of Fame 25th Anniversary concerts at Madison Square Garden in New York City. CSN was inducted into the Rock and Roll Hall of Fame in 1997. David Crosby has also been previously inducted for The Byrds, and Stephen Stills with Buffalo Springfield; at this year’s 2010 ceremony, Graham Nash will be dual-honored as well when The Hollies join the fold.

CSN’s music immediately became a cornerstone of rock ‘n roll with the group’s self-titled 1969 debut LP, now one of Rolling Stone’s “500 Greatest Albums of All Time.” That same year, they were honored with the GRAMMY award for Best New Artist. 1970’s Deja Vu–another “500 Greatest”–followed, the first album from the group’s four-man line-up with Neil Young (CSN&Y). Ever since–through changing times and various configurations–Crosby, Stills & Nash have continued to tour and record as “three together.”

More Europe and United States dates to be announced shortly.
For more information, log on to: www.crosbystillsnash.com