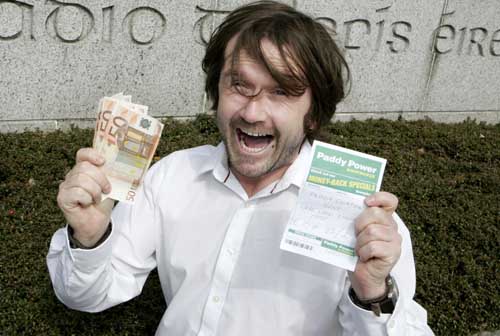 37-year old Courtney was on the show to promote his forthcoming solo show at Vicar Street on Sat 25th of April. At the end of his interview the Dublin born funny-man whipped out a betting docket showing that he had backed himself with Paddy Power for Patâ€™s job at odds of 33/1. Proving that heâ€™s game-for-a-laugh Pat promptly swapped seats and allowed himself to be interviewed by Courtney much to the delight of the live audience who gave them a standing ovation.

Paddy Power said â€œSeen as Paddy did actually take over hosting duties on the Late Late Show, if only for 5 minutes, weâ€™re going to pay out on him. But to be fair to all other backers their bets will still stand until a permanent replacement for Pat is announcedâ€