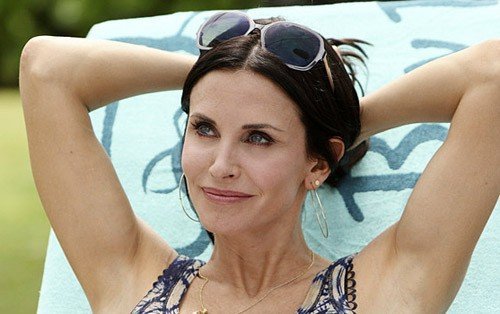 The gorgeous Hollywood star Courteney Cox tells TV Buzz Magazine from The SUN on Saturday, she’s still hurting from her marriage break-up: “David’s my best friend and I love him.”

She adds: “We were married for 11 years and we did a pretty good job. Now we want to set an example of how to be good friends. I mean, you have so much history with someone, there is no point in letting egos change what you’ve had.”

Courteney pours her heart out to TV buzz saying: “I wouldn’t do anything but support him.” She reveals: “I’m his biggest fan. We had our compatibility issues, but we’re very close.”

The actress reveals: “I’m not over it yet,” she admits, “When you separate, everything that happens for the first time is very intense – the first birthday, first anniversary. But in some ways we’re closer than ever as we communicate so much better now.”

The actress is famous for her role in Friends, playing Monica Gellar but she reveals to TV buzz: “There was a day when we didn’t know if Friends was going to continue or not.”

Courteney says: “The day Monica asked Chandler to marry her – that was my favourite moment – we thought [the show] might be over. But then I was with Friends for another five years.”

And thank goodness it did, what would we have done without Friends!?
Read more in Buzz Magazine from The SUN on Saturday
facebook.com/TVbuzzmag