On Saturday 14th May the groundbreaking Smirnoff Nightlife Exchange comes to Northern Ireland for the first time. The event at Kellys Portrush will see the world’s leading vodka brand, The Smirnoff Co. bring the best of Argentinean nightlife to both Kellys and Lush! for what will be an access all areas event at Northern Ireland’s biggest nightclub. 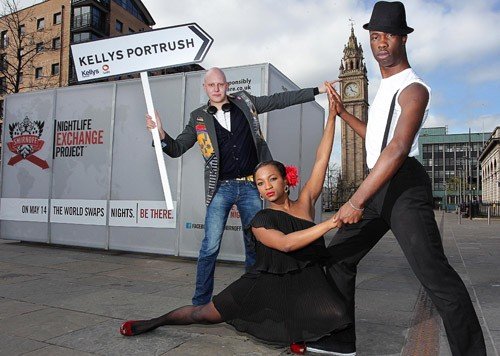 The initial phase of the Smirnoff Nightlife Exchange in November 2010 saw 14 countries swap global nightlife on the same night. Ireland swapped with Argentina.

The Nightlife Exchange continues at Kellys with the best sights, sounds and flavours of South America coming to Northern Ireland’s biggest nightclub for an event unlike any other staged before at the venue.

The entire club will be transformed into an Argentinean carnival with stilt walkers and tango dancers performing throughout the night.

Kellys and Lush! will be lit up by fire-eaters and inspired theatrical acts. Visitors to the venue will be welcomed at the door by Paka the fire-breathing horse. More than 200 metres of fabric will be used to dress the venue, creating a stunning sea of light blue and white, the colours of Argentina.

The music acts will also draw on the best of Argentinean culture. DJ David De Valera represented Ireland in Buenos Aires as part of the Nightlife Exchange in November. He will bring a fusion of UK dance music mixed with the best beats from South America. 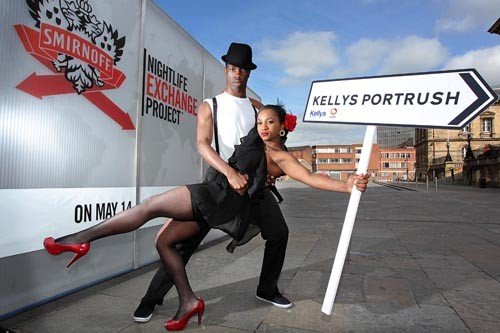 Joining him on the bill will be Lush’s resident DJ Col Hamilton who will play crowd-pleasing tunes with an Argentinean twist.

Completing the line up is one of Northern Ireland’s most popular DJ’s, Cool FM’s Connor Phillips.

David De Valera said: “I can’t wait to get to Kellys, to play alongside Col Hamilton and Connor Phillips and to bring a flavour of Buenos Aires to Portrush.

The Smirnoff Nightlife Exchange creates one off, fantastic occasions and I am looking forward to being part of this one on 14th May.”

The Smirnoff Nightlife Exchange at Kellys Portrush will give visitors the opportunity to sample South American inspired drinks including an Argentinean take on the Smirnoff Mule.

There will be golden tickets up for grabs on the night with each one giving exclusive access to a VIP area where Smirnoff Argentinean cocktails will be served.

Even the food menu will be Argentinean themed with chori dogs and papas fritas on offer.

Carol McHugh, Smirnoff Brand Manager, Ireland said: “Smirnoff was recently voted number 30 in the Social Brands 100 report. 2 It was the highest ranking alcohol brand and the only spirit on the list that ranked brands on the basis of their social interaction with people.

Campaigns such as the Nightlife Exchange Project only serve to reinforce the commitment of the Smirnoff Co. to consumers by creating dynamic, one off nightlife experiences. I am looking forward to going to Kellys and witnessing the best of Argentinean nightlife come alive at what will be a must BE THERE event.”

Admission is £7. Doors open at 10pm. Visit www.facebook.com/smirnoffireland for further information on the Nightlife Exchange Project.
Drink Responsibly.
Drinkaware.co.uk for the facts
Over 18s only