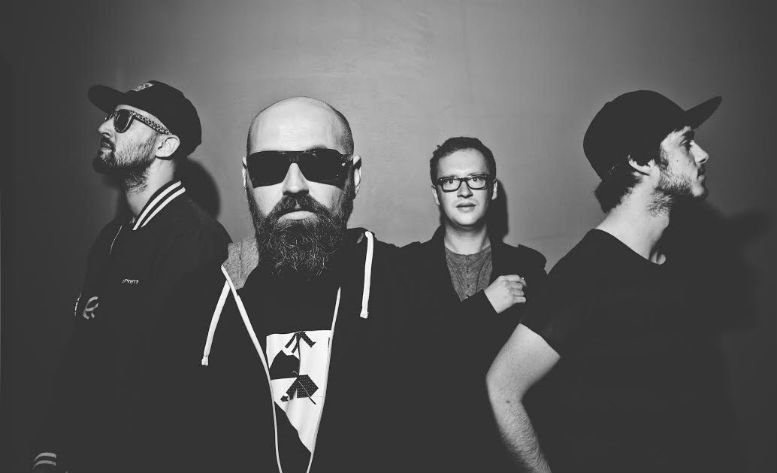 Can you tell us 4 things we should know about COTTON CLAW?

We are 4 beatmakers / producers from France.
We play on stage with no sequences.
We release our first album on May 8th in UK on Cascade Records.
We love rhum arrangé 😉

Our first EP – Dusted – was more like a test for us. You can feel the influences from the 4 guys and we didn’t really find our sound yet. Now, with Volutes, we did it : it’s where we wanted to go since the beginning, it’s like a real ID Card! We wanted to make something varied, but coherent to give our vision of electronic/club music.

What were your influences whilst writing ‘V O L U T E S’?

An album like Lone’s Reality Testing inspired us a lot. It gets everyone to agree! But each of us is influenced by different influences so we can name Romare, James Holden, Dorian Concept, Clark, Flako, Fantastic Mr Fox…

How do you sell ‘V O L U T E S’. to someone unfamiliar with your sound?

The word ‘Electro’ sounds very vast but we produce electro tracks with synths, pads: we are not Djs with turntables! This LP brings 12 tracks together to create a dancing mood but not ‘vulgar’. Volutes is colourful, varied and we hope everyone will find his groove !

What’s the best and worst thing about making as 4 producers?

The best thing is probably on stage: we are a “real band”, it’s cool to communicate, there is a dynamic you can’t really have in a solo situation… And we always have a good time on the road!

The worst…It’s certainly more difficult to put everyone in agreement when we compose, but on the other side, if you don’t have the solution, another guy will!

We started to work in 2012 and we did our first gigs in 2013. Actually, all of us have a solo project before but we decided to get together and create this new band, with its own sound and with the intention of playing everything on stage.

What has been the hardest part of being in the music industry for you? And the best part?

The best part is probably to travel a lot and meet many people like producers, press, professionals…it’s pleasant, it gives us many ideas and opportunities.

The worst…As you say, it’s an industry so there is a part of business… It costs a lot of money to produce records, to go on tour…. You need to be distinguished to take your place in this industry and keep this place longest.

We listen many kinds of music, everyday. All of us like HipHop and more generally Black Music: it’s where we come from! We listened a lot to producers like J Dilla & Fly Lo who are references for many musicians but also people like Romare, Hopkins or bands like BadBadNotGood…

Now, we go on tour so we focus on the live set… We just won a prize in France called ‘Prix Chorus’ which gonna help us a lot to build this new live set, to work about stage design, light show etc. and we hope to play many gigs with the release of Volutes! One day in UK, we hope! Cheers!