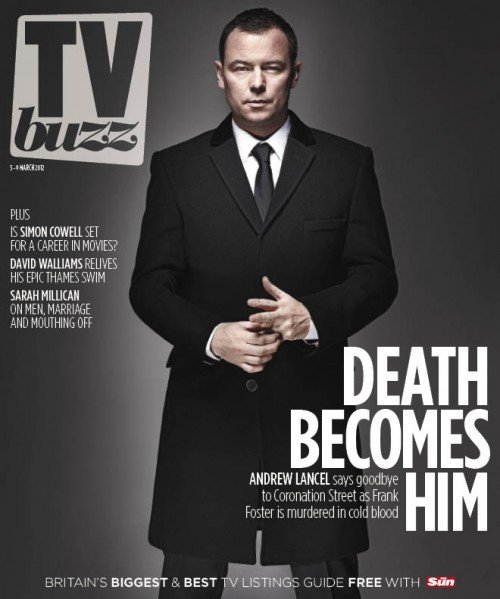 After just a year in Weatherfield, Andrew says goodbye to Coronation Street, as he reveals to TV buzz that Frank is to be murdered: “The last time you see Frank alive was the hardest scene I’ve ever done.”

Andrew explains to TV buzz that he knew what he was getting into: “Frank’s story was always going to be: ‘He’s gonna come in, he’s gonna rape, then he’s gonna die,’” says Andrew, “But as a character, he didn’t go in to rape and pillage – he just wanted to have some fun and sleep around. He was a Romeo.” 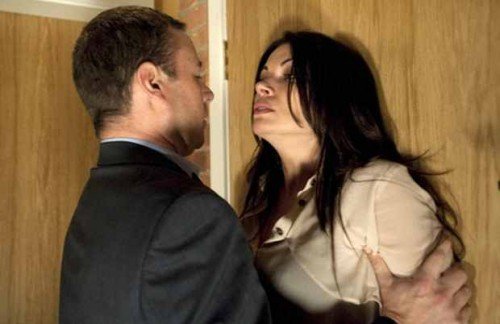 Frank made a number of enemies in Weatherfield, Andrew was one himself: “I don’t like anything about Frank, but I had to make him believable and likeable.”

Andrew adds: “Frank is a creation, but I did do some research into men like that. I looked at how they manipulate people.”

Andrew tells TV buzz that there was one woman in particular who helped him through his time on Corrie: “Alison King [Carla] has totally been there for me,”

Andrew says of his on-screen ex-fiancée: “We worked really hard on the rape scenes. Every single line and nuance and where I would touch her was worked out really tightly in advance.”

He also adds: “Charlie Condou [who plays Marcus] gave me his flat for a week while we filmed the scenes, as I didn’t want to go home.

Ali and I spoke to each other all through the night – she has the heart of a planet and doesn’t seek any kind of fame. I’ve never enjoyed acting and laughing so much as I have with Ali.”

Andrew also can’t talk more highly of his wife Louise, who’s had to share her husband with Alison throughout his shooting schedule: “Lou and Ali met early on and have become friends.” He reveals: “Lou and I always talk about work – I’ll tell her when I’m snogging someone else as I want her to be involved in what I’m doing.”

He adds: “We talked a lot about Frank when I was offered the role. In my heart I wanted it, but another part of me thought: ‘Is this the right thing to do?’”

Andrew admits to TV buzz that playing such a monster really got to him, “I used to read interviews about actors who stay in character and think: ‘What a load of b****** but it’s true.’”

He explains: “There was one day when I had to go home and get Isaac [his son] – it was also the day we’d done the rape scenes.

We were going straight out for tea and I didn’t have time to take the make-up off. I went to collect Isaac and I was very fretty and not myself. Lou told me to go and have a glass of wine, so I had a large one.”

Andrew’s time on Coronation Street may have been mentally and physically demanding, but he couldn’t help the tears when saying his farewells: “It’s like Christmas – it always comes to an end, but you get to keep the gifts forever.”

He adds: “I got a bit choked up when I went out for a meal with my nearest and dearest from work.”

The actor is keeping all his options open for the future: “There’s other stuff that I’m being asked to do,” he says. “Nice rounded characters. I just hope they smile a bit more.”

The burning question we all want to know is, who kills Frank?! “Carla’s certainly got more reason than most,” says Andrew.

“And Peter is Frank’s nemesis. But don’t rule out Sally. Frank has taken her to places she’s never been before.”

We can’t wait to find out!
Read more in TV Buzz Magazine from The SUN on Saturday
facebook.com/TVbuzzmag