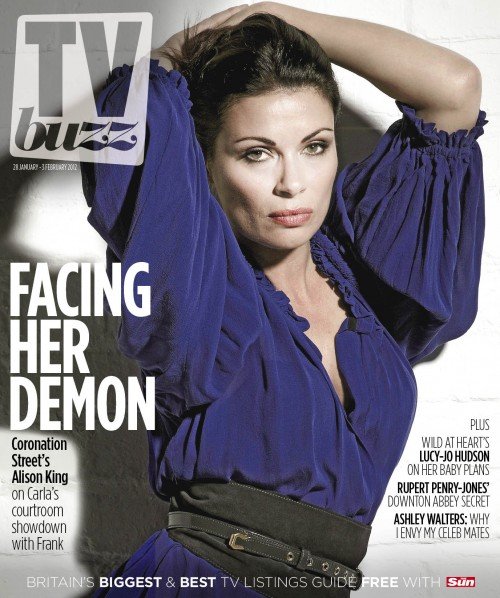 Alison King has filmed one of Corrie’s most explosive storylines about sexual assault; she revealed to TV buzz how she felt when filming these scenes.

She said, “You really feel the pressure to play it right for all those people who have been in that situation.”

Alison explained, “We went to St Mary’s Sexual Assault Referral Centre in Manchester, where a lovely lady called Bernie helped me through every stage.”

She has become very close to her on screen ex –fiancé Frank Foster [Andrew Lancel] “I call him my very own Stephen Fry as he’s full of trivia. I’ll tell him: ‘You’re boring me with all these facts! Will you shut up now?’

But we’ve got chemistry that can be hard to find in this business. Andrew keeps me alive – he keeps me going.”

Alison also revealed, “I love working with Chris Gascoyne [Peter Barlow] so much. It’s like working with your grandad. Honestly, he gets older by the day, but I know I’m going to have to give him back to Jane Danson [Leanne] at some point because she misses him dearly.”

Alison also told TV buzz, “It’s really hard to watch yourself. I don’t think as an actress you ever go: ‘That was brilliant’ – you always just cringe!” So what does the future hold for the actress?

“I’ve always said I’ll keep playing Carla till I get bored of her. And with someone like Carla, there’s never much chance of getting bored.”
TV Buzz Magazine from The SUN
facebook.com/TVbuzzmag