COLIN & JUSTIN, one of the country’s favourite couples, have – after 22 years of non-marital bliss – finally decided to do the decent thing and become man and husband! In a ceremony completely at odds with the flamboyance the two stars are known for, they quietly tied the knot at Chelsea Old Town Hall.

The service was kept a closely guarded secret, and while the couple’s mothers both gave their blessings, the ceremony, on February 15th, was attended by just two close friends, Elaine and George Ponte, who acted as witnesses.

After the wedding itself the boys headed off for champagne at Oriel in Sloane Square followed by lunch at the Wolsley and more champagne! They have just returned from their honeymoon at the luxurious Four Seasons Resort Estates on the island of Nevis in the Caribbean. 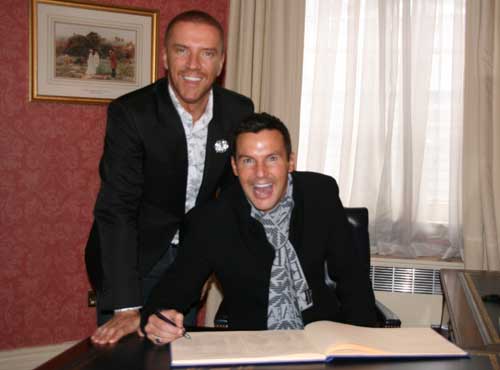 The two were secretly engaged last December while staying in Muskoka and their engagement rings came from Tiffany’s in Toronto and Bulgari, in London.

Scotland’s dynamic duo were overwhelmed by the occasion. Colin said “It was just the most incredible thing to do after waiting all these years. We’d recommend it to anyone! A good thing just got even better. We STILL don’t know why we waited so long!”

Justine agreed “If we are an inspiration to other gay couples then we are very proud. It’s so fantastic that same sex unions are now becoming part of British life. I was so nervous that I got a SERIOUS fit of the giggles mid way through teh ceremony! I literally couldn’t stop laughing and then it kind of morphed into tears”

“I’d always said that even after twenty two years with Justin I still wasn’t sure if he was the right man for me! Now I KNOW he’s the one!” Colin joked. And they are looking forward to their new lives together as a married couple “This is a new beginning for us. We’ve never rested on our laurels and this marriage is the start of our next exciting journey…”

Justin had the final word. “We are SO incredibly happy. And what a great excuse to buy some new jewellery!”

Colin & Justin can currently be seen on UKTV Style in COLIN AND JUSTIN’S
HOME HEIST. Week days at 8.00pm.