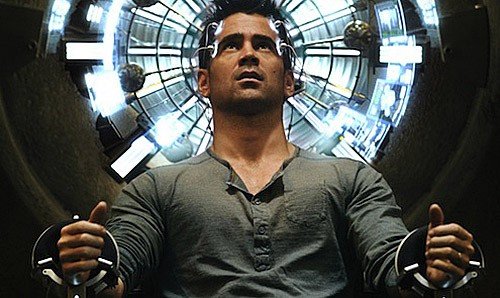 Total Recall is about to steal your mind….so our friends at Hollyscoop caught up with Colin Farrell at the Los Angeles premiere of the film .

The actor was quick to talk about his action sequences where he got to drive a seriously badass hover car… Well, sort of:

“I didn’t get to drive it, I was just pretending,” he said. “They had two gentlemen, beneath me in a roll car.”

Farrell’s hover car was fixed atop a stunt car to make it appear like the vehicle was hovering from the inside looking out.

Nonetheless, the actor cited the car scenes as the “scariest thing I had to shoot in the film.”
Despite the visual illusions of the futuristic car, Colin’s toned physique was no trick.

Though, he did have some big shoes to fill with Arnold Schwarzenegger as his predecessor.

“I got in as good enough shape as I could in four months,” he said.

Colin described his take on the Douglas Quaid and Hauser that Schwarzenegger made iconic as more or less the typical modern day man thrown into an extraordinary situation.

“He was just a representative of a decent portion of male society that are not always content with their lives,” he said.

“Whether it’s their lives in the work place or marriages at home or even they are content, they are getting along with business of life.

Total Recall is out the 29th August.
For the full story go to Hollyscoop.com