The dark side of circus life, family loyalty and poverty is revealed in Carnival, the riveting new play from Belfast prize-winning author and playwright Lucy Caldwell which premieres as part of Queens Festival from October 24 â€“ November 1, (Preview 23 October).The play is inspired by the incredibly strange but true story of an Italian â€˜circus of horrorsâ€™ in which teenage girls were alleged to have lived in â€œinhumanâ€ conditions and forced into dangerous acts with animals, including deadly snakes and flesh-eating piranhas.

In the play two sisters, taken in by a Romany carnival troupe during the Balkan wars of the 1990s, find themselves at the end of the road in Belfast in 2008 and at the centre of a sick barter between two rival sides of a family. The carnival troupe is disintegrating, in more ways than one, from poverty, discrimination and dying customs and soon find out that pride is not a sellable commodity. 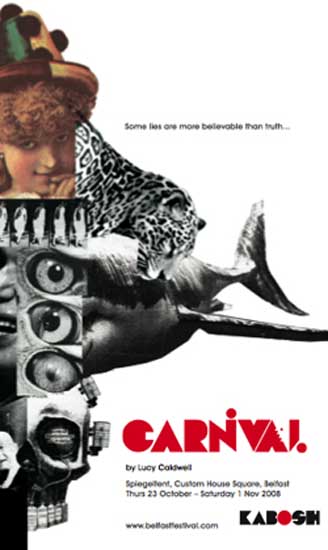 But leaving the life â€“ even a poor life â€“ that youâ€™re only ever known is never easy and Caldwellâ€™s first play to be premiered in Belfast promises a theatrical experience that will provoke questions as well as entertains.

Produced and commissioned by the groundbreaking Kabosh Theatre Company, especially for the Queens Festival, Carnival will be performed in the Victorian splendour of the Spiegeltent at Custom House Square, Belfast, which can only add to its atmospheric appeal.

Carnival steps away from Caldwellâ€™s usual subject matter but she still manages to authentically expose the life of those who live below the radar of our safe, comfortable lives.

When director and actress Paula McFetridge approached Caldwell to write a play for the Spiegeltent, Caldwell knew that she didnâ€™t want to write anything that could be performed in a traditional theatre setting.

â€œThe idea of the Spiegeltent interested me and I knew that I wanted it to have a circus, performance feel to it. As I have a long term interest in gypsies and the travelling community, I decided to set it amongst a travelling Roma carnival troupe.

â€œBut it also fascinated me to turn the grand narrative of Ireland and our emigration theme on its head and look at a group of immigrants coming here to look for a better life. And when I read the newspaper piece about the girls forced to swim with piranhas, that was the final piece of inspiration for me.â€

As part of her research for the play, the 26-year-old from East Belfast, also discovered that her great uncle was disowned by his family when he ran away to join the circus when at the age of 13.

All of the actors in this three-act play, which uses many Roma words and phrases to give a slightly â€˜other-worldâ€™ feel, are required to perform basic circus skills.

As director Paula McFetridge was also one of the founders of Belfast Community Circus, this mixture of drama, circus performance and live music combines to create a unique theatrical experience.

â€œCarnival is a stunning mixture of drama, music and carnival acts to tell a story of desperate people and hard choices with so many relevant themes of today being touched upon.