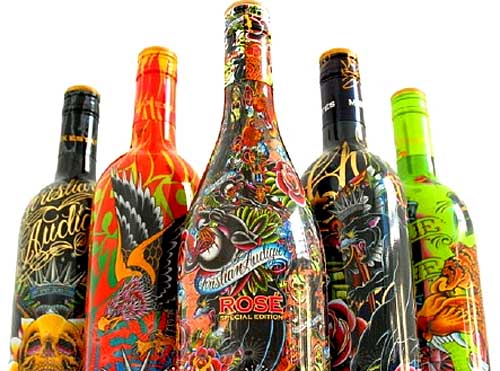 LONDON SO CRAZY FOR CHRISTIAN AUDIGIER CHAMPAGNE- THIEVES HAVE NICKED THE LOT!!
Never mind queuing outside of TopShop for the latest Kate Moss creation, designer brand crazy Briton’s have gone one step further for the Launch of Christian ‘King of Fashion’ Audigier’s new designer Champagne at Movida nightclub in London’s West End.

Some cheeky chappies have actually gone and stolen the lot – they shouldn’t get far with the highly distinctive tattoo design inscribed bottles but never mind Britain, there’s more on the way from France coming to your nearest top nightspots soon.

Police were called to Movida nightclub in London’s West End on the afternoon of yesterday just hours before the global launch of fashion guru Christian Audigier’s new Champagne range.

The thieves were caught on the club’s cctv and police are now conducting a thorough investigation into the theft of the Champagne worth several thousand pounds.

The launch went ahead anyway with Christian Audigier himself present with VIP guests including celebrities such as Peter Andre, Aleesha Dixon, Danni Behr, Jermaine Defoe, Blue’s Simon Webbe, Alan Carr, DJ Ironik, Bianca Gasgoigne they mixed with clubgoers enjoying bottles of Christian Audigier fine wine – which has most definitely whetted their appetite for the Champagne that is now being shipped by special delivery to the UK and will be available shortly from leading nightspots and clubs plus selected quality drinks outlets.

ABOUT CHRISTIAN AUDIGIER
Christian Audigier is an acknowledged style genius having contributing to the success of iconic brands such as Diesel, Fiorucci and Naf Naf before masterminding the huge global success of Von Dutch and latterly overseeing the rise and rise of the distinctive Ed Hardy fashion brand beloved of hundreds of celebrities, actors and musicians including Britney Spears, and Kanye West. A tireless entrepreneur, Audigier has even found time to launch a nightclub – Christian Audigierâ which has quickly become the hottest nightclub on Vegas’s glamorous Strip.

He has also starred on America’s Next Top Model and Cribs on MTV his close, A-list celebrityfriends include Madonna and Michael Jackson who attended his star-studded 50th Birthday party in the USA last year.
www.christianaudigier.com