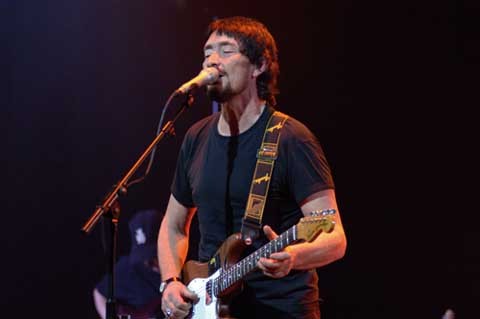 After a brief absence Chris Rea is now returning to the live stage with a newly formed quintet. In concerts lasting two hours, his Fabulous Hofner Blue Notes present a mixture of blues-orientated instrumentals and new songs as well as, of course, the absolute Chris Rea classics. On Tuesday 8th April 2008 the brilliant guitarist with the smoky voice will be returning to Belfastâ€™s Waterfront Hall. Chris Rea has sold more than 30 million CDs worldwide.

The consequences of a serious illness had forced the always reserved and modest performer to adopt a different lifestyle; one that could not be made to fit in with the usual touring business. However, he clearly neither wanted to miss the â€œLive feelingâ€ entirely, nor was he able to do so. The Fabulous Hofner Blue Notes cater for this need. Together with Robert Ahwai (guitar), Neil Drinkwater (keyboards), Colin Hodgkinson (bass) and Martin Ditcham (Drums) Chris Rea lends his songs a bluesy trace of the Sixties, which is also to a certain extent a tribute to his idol BB King. â€œThat is the music that I have always wanted to play: real, genuine guitar musicâ€. These are the words he used when talking about the new band and the album that is due out in December.

â€œI love being on tour. Thatâ€™s the best job in the world, if only I had a different body,â€ said Chris Rea in his statement. â€œMy state of health can deteriorate any moment, however, which is why I simply had to find a different way of working.â€

The legacy of this artist, who is celebrated as a rock romantic and an instrumental virtuoso, includes the publication of the unique eleven CD-set â€œBlue Guitarsâ€ project. This milestone of modern music history comprises 130 songs, a DVD and a book with paintings by Chris Rea as well as photos and personal sketches. Painting played an important role in his life during his illness.

Chris Reaâ€™s particular individual range encompasses pop-, Latin- and soft rock, not to mention the blues roots that come increasingly to the fore. The master of the economic gesture and few words convinced beyond the world of mainstream and fashion trends with his own very personal style. The marvellous songwriter and brilliant blues singer from the English industrial city of Middlesbrough has always met with a particularly positive response in Belfast.

The media celebrated particular live quality of this likeable artist as â€œone of the great moments of blues rockâ€œ. As reserved as he is on the stage, all the more perfectly is his mastery of his instrument and his striking voice. Chris Rea never attached any importance to show, wisecracks or special effects. But he particularly values live performances, as here he can sense the publicâ€™s response directly.

The gifted slide guitarist has always drawn his strength and inspiration from his private life. The son of an Irish father and Italian mother has never been involved in any scandals and led a harmonious family live. And underneath it all is a musician who recognised the difference between superficial fame and lasting impression, between faceless â€œconveyor-beltâ€ production and personal expression.