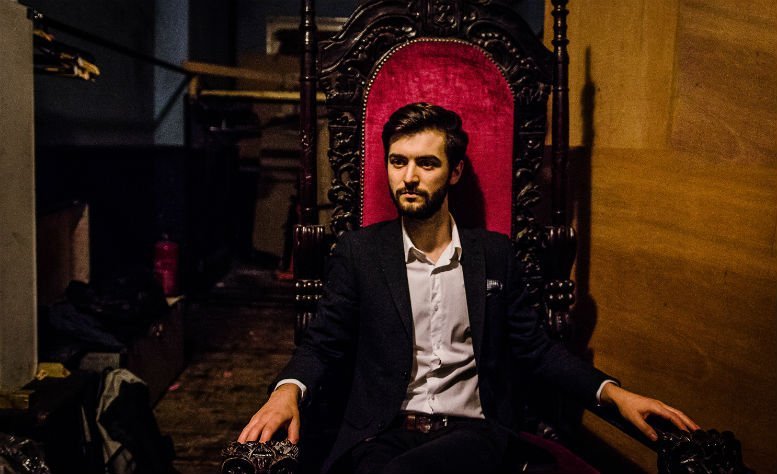 Charlie Barnes, is a solo project, but it’s also a band, which delivers a brainy explorative sound. His debut album titled ‘More Stately Mansions’ (produced by Steve Durose of Oceansize) released via Superball Music on 11th May, no doubt sets Charlie apart from the multitude of wishy-washy singer songwriters currently around.

Hello! Jolly good thankyou. I just got home from work and I’m going to make a nice risotto in a bit. Spot on Wednesday, that.

Although you go by the name ‘Charlie Barnes’ you are actually more of a band, is that right?

Can you tell us a bit about your live set up as a band?

When I play solo I tend to do a bit of the old looping thing, just to try and keep it all a little bit more interesting for the audience. So for band shows we do try and incorporate a bit of that.

We’ve got a laptop hidden away helping us to run some loops and enabling Josh and I to trigger some samples from the recorded versions of things. There’s a part in the song ‘Dresden’ where I layered up my vocal 40 odd times to sound like a big, terrifying choir, so Josh sets those going while tapping his guitar part with his free hand. We definitely have to do a lot of multi-tasking…! 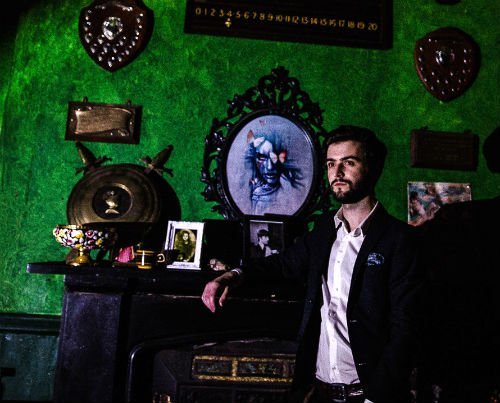 Have you had any interesting/funny/entertaining stories from being on tour so far?

As a band we’ve only actually done one tour so far. To keep budgets tight we were carrying the four of us and our entire backline in a rented Citroën Picasso, so I had to squash into one of the seats in the boot that are designed for toddlers.

That tour was a lot of fun. I took the guys via my hometown of Lichfield so that we could visit the sandwich shop I used to go to all the time in my teens. It’s interesting for me, honest…

My Nan came and watched us play in Birmingham having only landed back from a trip to Fiji earlier that day, so we were pretty chuffed about that. Up until then the other guys had only heard rumours about how unbelievably cool my Nan is, so it was nice for them to finally meet the legend that is…

Our guitar tech Ben took a pretty hilarious photograph of all of the band having a wee in a lay-by somewhere just outside of Bristol after we’d been stuck in monumental traffic on the way to ArcTanGent festival last year. You don’t see owt though, don’t worry…

If you have a run through my Instagram there’s a great video of Sean rapping along to that ‘Simon says get the f**k up’ thing (apologies for my complete lack of knowledge of hip-hop…). I think we were on our way to play in Worcester with Revere at the time. Halcyon days!

Sorry, we’re not very rock ‘n’ roll really. No stage cucumbers or anything like that.

It’s a fairly classic early-to-mid twenties sort of record to be honest. Lots about love, a hell of a lot about loss, and a bit about just trying to keep the wolf from the door once you’ve left the bubble of education with a fairly uselessly specific arts degree tucked under your arm…

The album’s definitive lyrics are probably the first and last songs (More Stately Mansions and Film). The title track came about when I was pouring far too much of myself into a crappy stop-gap job that served only to line somebody else’s pocket.

Nothing unusual, really, but you take a step back from that sort of thing and realise that far too many of us end up in the same situation and chase our tails until retirement.

Most of the record is very personal though. When I first started performing under my own name I tried to jam a lot of political ideas into my writing, which resulted in, for my money, a load of piss-poor lyrics that never really made me feel anything when I sang them. With this material, there are songs on there that I won’t ever play live. I just can’t really get through them.

You were lucky enough to have your album produced by Steve Durose of Oceansize! What was that like?

Steve Durose is one of the best people I know. By a country mile. His influence on my music is blindingly obvious to anybody who’s ever heard an Oceansize album. I’ve idolised that band and its music since about 30 seconds into hearing ‘Women Who Love Men Who Love Drugs’ for the first time, and I know that there will never, ever, ever be a band that will mean that much to me again.

I sometimes forget that it’s the same guy I stalked around the country as a teenager to be honest. We’ve always gotten along really well ever since we first started working together with Amplifier; it was always likely that we’d end up making some music together.

Like anything worth doing, there was a lot of hard work involved, but we had such a laugh during the whole process too. After spending a week at Chapel studios with the whole band getting most of it down, Steve and I went off to a couple of isolated cottages in Wales to finish off the rest of the album.

That was a great way to work – we’d spend a few hours recording takes for a song, then I’d cook our next meal while Steve sifted through to find the best takes. I’ve got really fond memories of that whole experience.

Who else would you like to collaborate with musically?

Having put an album together with one of Oceansize, and been a touring guitarist for Amplifier, I think it’d be pretty greedy of me to ask for more! There are loads and loads and loads of people I’d love to sing with though.

I’ve been absolutely caning Nadine Shah’s first album recently and I could imagine our voices fitting together pretty well. I’m up for anything, me!

We’ve heard you were also asked by a Leeds based coffee roasters to create your own blend! How did that coma about?!

Well, pretty much everybody in the band called Charlie Barnes works or has worked in a coffee shop at some point over the last four or five years. We have a close relationship with some of the local roasteries in West Yorkshire, so it just sort of came up as an idea really.

The guys at North Star are sorting it all out. I cupped a few different coffees with them a couple of months ago and picked out one that I was really excited about. So they’re going to build the blend around that and get it all roasted in time for the album release!

It should taste pretty wild…those guys like to keep their coffees light, bright and zesty so we’re excited to taste what they come up with.

What is your favourite blend of coffee?

…black as midnight, on a moonless night

And finally, what can we expect from ‘Charlie Barnes’ in the foreseeable future?

We’ve got a nice little run of gigs building up in our shared google drive that we organise our lives around. We’ve got some really exciting support slots coming up – we’ll be playing at the Camden Barfly in a couple of weeks with Black Peaks, and then just after the album comes out we’ll be supporting Vennart at his/their first Manchester show. I’m already terrified about that one.

It’s a very, very, very big deal for me! There are a few bits and bobs in Germany, and those will mark the first time I’ve ever taken the band overseas to perform so we’re ridiculously excited about that.

We’re playing on the mainstage at Maifeld Derby festival in Mannheim which was my first ever German festival slot 3 years ago. We want to get out and about as much as we possibly can to promote the album. Sometimes it’ll be all of us, sometimes just me, and sometimes maybe two or three of us, just whatever we can manage basically.