Hosts Ant and Dec sprang a surprise on this yearâ€™s campmates. For the first time in the history of Iâ€™m A Celebrityâ€¦Get Me Out Of Here! all ten of the celebrities took part in the first Bush Tucker Trial of the series. 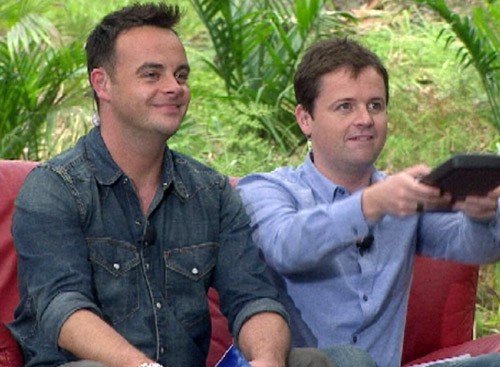 Entitled Terror Vision, the celebrities had been split into two teams – boys versus girls – and would have to go head to head in five rounds based on popular TV shows.

The first four rounds would be worth one point each but the fifth and final round would be the decider. The celebrities were playing for one final night of luxury whilst the losing team would face a night camped out in a make shift jungle encampment.

Visibly shaken and still in their finest clothes, the celebrities prepared to face the challenge.

First up was Lembit Opik and Kayla Collins who had to play â€˜Hell Hole Kitchenâ€™. Hidden in three holes were stars and the pair put their hands into the box and grab the star which were surrounded by scorpions, rats and snakes.

Lembit complained that that â€œit was an absolutely disgusting feelingâ€ whilst a screaming Kayla admitted â€œI was really terrified.â€

Next was Shaun Ryder and Gillian McKeith who faced â€˜Not The Ten Oâ€™Clock Newsâ€™. The pair would each read a headline and have to decide if it was true or false whilst facing gunge and critters falling onto them. Ant and Dec had to repeatedly tell a frightened Gillian to remain in her seat as she tried overcome her â€œphobia to insects.â€

Nigel Havers and Sheryl Gascoigne faced â€˜The Bug Factorâ€™ in which they had to duet to Grease hit, Summer Lovinâ€™. They both had to sing a section of the song but six words had been removed. Whoever correctly sang the missing words would win the point. To make it more difficult they would be joined by cockroaches, maggots and jungle slime.

Nigel admitted that singing was not his strong point, whilst Sheryl added, â€œthe children said whatever you do donâ€™t sing on there mum.â€

Next up were Aggro Santos and Stacey Solomon who appeared in â€˜Who Wants To Eat A Willy On Airâ€™. As the title suggested they both had to eat a kangaroo penis, the one who ate it the quickest won the point. â€œHis penis looks smaller than mineâ€ Stacey shouted. â€œNot for first timeâ€ joked Dec. â€œIâ€™m spitting penis everywhereâ€ she squealed.

And finally Britt and Linford took part in â€˜Disastermindâ€™ where they had 30 seconds each to answer as many Australian themed general knowledge questions whilst encased in helmets containing spiders. Each struggled to answer the simple questions as the spiders crawled over their faces.