NORTHERN Ireland’s edgy clothing brand Ripstop is proving a hit across the UK, thanks to celebrity fans.
The brand, launched by Co. Armagh man Barry Corvan in 2006, is now stocked in 180 stores across the UK and Ireland, and has been worn by sports stars Ricky â€˜The Hitmanâ€™ Hatton, Neil Lennon, and Martin Johnson.
Several Manchester United players have been snapped wearing a Ripstop hoodie and the brand is proving popular in the music world with top DJs Micky Slim, Kate Lawler, Electro Nympho and Chris Lake sporting t-shirts.
When Mario from Big Brother wore one of Barry’s t-shirts live on air 100,000 copies of the same design flew out of stores.
Ripstop began life in the bedroom of 39-year-old Barry Corvan, a buyer from Lurgan. 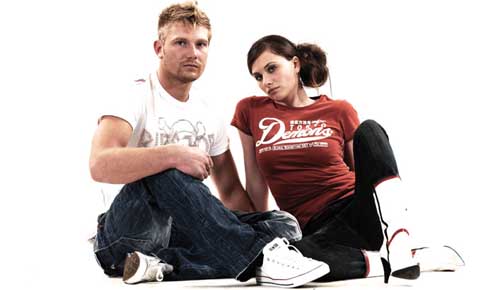 He said:Â  â€œItâ€™s been an amazing two years for us.Â  After finding the initial investment of Â£1m, from a private investor, things started to happen very quickly. 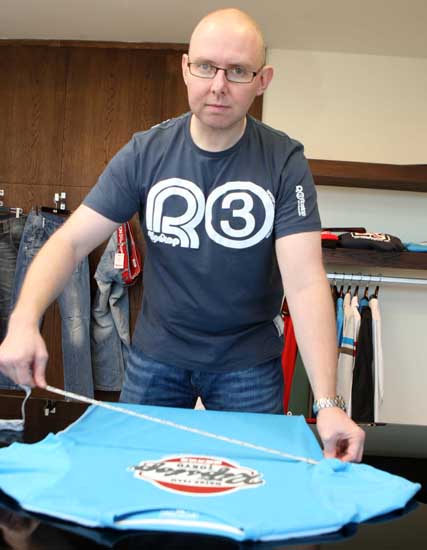 â€œInitially, we went down the Invest Northern Ireland route but unfortunately the amount of investment they could provide at the time wouldnâ€™t have covered the cost of the computers we needed.
“I was forced to look further afield and through determination and negotiation I was able to attract an investor who believes in my product.â€
Barry spent 16 years as a buyer travelling the world meeting clothing suppliers and negotiating on behalf of his employers to help keep their overheads down and profits up, knowledge which has helped him grow Ripstop Clothing to todayâ€™s financial success story.
â€œThe great thing about my background is that I already know where to go for the best deals”, he said.
“Iâ€™ve used this knowledge and the relationships Iâ€™ve built with suppliers to get great value across my business, helping me to keep the cost level of Ripstop Clothing accessible.â€
The road to running his own business wasnâ€™t an easy one but Barryâ€™s belief in his product, expertise in the fashion field and single minded determination meant it was one he was bravely willing to take.
He said:Â  â€œThe jobs I had always took me away from my family for a large part of the year, so basing Ripstop Clothing in Northern Ireland was one of the first decisions I made.
“Our warehouse, headquarters and global distribution depot is in Lurgan as I feel it is important to stay loyal to your roots and generate profits within the local economy which in turn stimulates local jobs.â€
Barry is very hands-on in the design process.
â€œI work with a designer and from start to finish we can get a new hoodie or t-shirt design into our outlets within just four weeks”, he said.
â€œWe are constantly refreshing our range to stay in touch with whatâ€™s happening on the music scene and with pop culture in general.Â  We only produce a small amount of any design so once that sells out it wonâ€™t come around again.
“It makes Ripstop Clothing current and of the moment something the people who buy our clothes feel is important.Â  It means Ripstop is seen as exclusive, as a niche product which true fashion followers appreciate.Â  We donâ€™t have to go for the mass market as we donâ€™t want the product diluted.â€
Barryâ€™s vision for Ripstop Clothing is that the sky is the limit in terms of where the brand can go.Â  He has invested passion, expertise and huge amount of effort to make sure that Ripstop Clothing will be a global force to be reckoned with in the future.
â€œI think our success is a mixture of things to be honest – good design, value for money, not mass producing and the quality of our clothes”, he said.
â€œIf someone had told me that within two years we would be where we are now I wouldnâ€™t have believed them.
“The belief we have in Ripstop Clothing from the outset has been unwavering and itâ€™s personally satisfying to see that belief borne out.â€