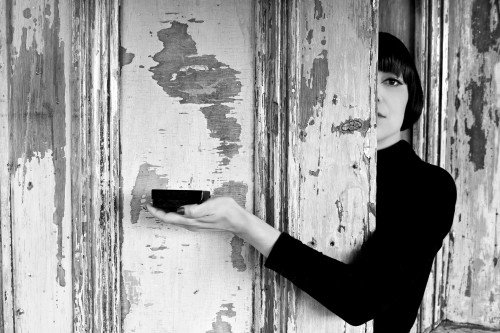 London purveyors of quirky noir-ish tunes Phantom have been a bewitching collective to monitor over recent years, fans of their particular brand of music will be pleased to hear that there are some distinct links between their work and this new release.
Atom Eye is a new solo project by Phantom front woman Elsie Martins and it is a remarkable adventure into the realms of experimental music.

Genuinely offbeat and out there at times Atom Eye’s first part of their Trilogy offers up a view into Martins’ own musical landscape of sound art style structure.

Trilogy Part 1 is not simply a standalone piece (as it will weave itself into the overall sound of all three pieces when they are released to create a whole musical entity/vision), but it does have its own style and substance (influenced in part by guest percussionist Pete Lockett), the dark and rich elements of experimentation combined with analogue tapes, looping and reel-to-reel systems all work to build up the vision of a musical adventure, that has style and creativity in abundance.

Atom Eye’s works are a great introduction into a musical genre that whilst specialist in its nature, can be a fun one to explore.

This offering from Miss Martins may just tick all of the boxes in letting new listeners gain access to the world of experimental music. The fact that these singles will be free to download make it all the more reason to give them a shot.

Atom Eye – ‘Trilogy 120 Part 1’ will be available as free download (from Monday 6th Feb) at atomeyemusic.com/atomeye.cfm.