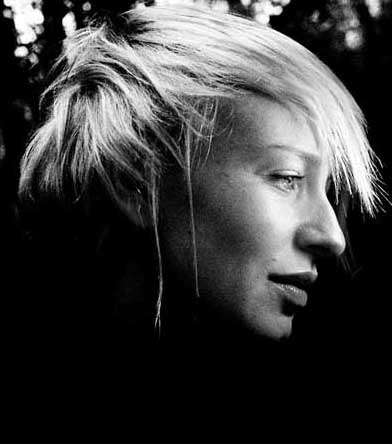 Cathy Davey is the daughter of a musician father and a sculptor mother whose childhood was spilt between England and Ireland.

Her schooldays were equally as mixed an affair, with Cathy’s individualistic instincts tending towards rejection of organised education. This invariably led to friction followed quickly by suspension and inevitably to expulsion. Her schooling did lead though to the nurturing of her artistic talents and Art College beckoned before the lure of music would brook no competition.

Cathy took to writing songs easily, but with the smallest record collection ever, she had little to reference her work to, so she kept it to herself. Her first gig, at an open-mic affair, brought a manager and the bedroom-demos led to a contract with Parlophone main-man, Miles Leonard.

A beautiful, sunny summer spent in Wales with Ben Hillier resulted in Something Ilk the critically acclaimed but commercially unsuccessful debut album. Supported by 18 months of touring torture for her as she suddenly realised she was a very long way from her bedroom and singing to strangers wasn’t at all fun the album didn’t reach a wider audience without Radio support.

Almost three years on and Cathy Davey is ready to release Tales Of Silversleeve her second album on Parlophone.

This time though the album was recorded in much the same manner as it was written; in various houses in Ireland and London. A methodology ensuring Cathy could develop her songs to their specific requirements rather than the costly meter’s-running, approach of the big studio.

Her co-producer, Ex-Sneaker Pimp, Liam Howe, helped Cathy to continue her experimental approach to recording but ensured that the songs retained their immediacy – probably the single biggest difference between the two albums. These new songs, Rueben, Sing for Your Supper, and Moving, etc. won’t take a second listen before they snare you good and proper.