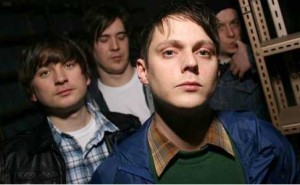 Just returned from LA where they have been putting the finishing touches to their David Holmes produced debut album, Cashier No.9 play their biggest Belfast headliner to date this coming weekend.

Itâ€™s been an eventful year for the band, with widespread acclaim directed at their first two single releases When Jackie Shone and 42 West Avenue.

Sold out Belfast shows at The Menagerie and Black Box followed. The summer months have seen them play at major festivals including Glastonbury and Oxegen, and they also played a series of UK arena shows with Snow Patrol.

BEW is Experimental/electronic producer Barry Cullenâ€™s moniker and an abbreviation of Barryâ€™s Electric Workshop. Part of the Dodgy Stereo collective, Barry blends sounds and images from old junk with hi-fi sounds and graphics. For this show heâ€™s presenting a dj performance.

Robyn G Shiels will present a full band performance on the night also. His new EP ‘The Great Depression’ is released on Belfast based imprint Only Gone Records. David Holmes has said of it â€œRobynâ€™s new music is just breathtaking. Itâ€™s a really moving piece of work.â€