Her recent appearance on Later with Jools Holland having caused quite a stir, Camille O’Sullivan returns to Belfast next weekend.
FollowingÂ  sell out seasons in Sydney Opera House, New York, Edinburgh, Brighton, Adelaide andÂ  Melbourne, Camille performs the dark and light songs of Jacques Brel, Nick Cave, Tom Waits andÂ  more in a multi award winningÂ  show.As the profiole has grown the career demands have increased. Camille recently co-starred in the Stephen Frears film Mrs Henderson Presents, opposite Dame Judi Dench, Bob Hoskins and Will Young. She has also appeared as a musical guest with Damien Rice and Shane McGowan among others. 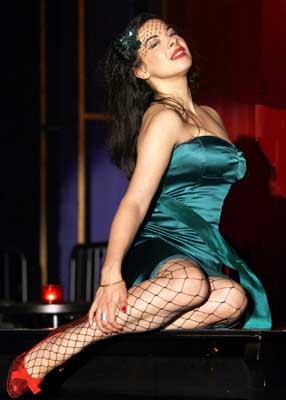 Possessed by a decadent European spell this raven-haired Irish chanteuse is a real star enthralling audiences with her stunning voice and passionate, dramatic performance

This past year has seen sold runs of twelve dates at Sydney Opera House and eighteen at Edinburgh Festival, with accompanying five star reviews in the international media.

Doors 7.00pm. Tickets Â£15.00 are available across the counter from all Ticketmaster outlets, online at www.ticketmaster.ie , and on their 24 hour booking line on 0870 243 4455. (sales may be subject to booking fees, credit card charges and the commissions of Ticketmaster agents).