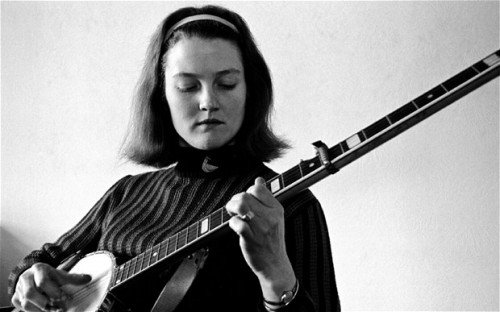 The wonderful track ‘Bad Bad Girl’ was originally transcribed from an Alan Lomax recording of Ozella Jones in Florida State Prison in 1936.

Get the free ringtone download for ‘Bad Bad Girl’ here

Broadcaster has never been afraid to break musical boundaries or cross genres. A collaboration with a septuagenarian American folk music legend may seem highly improbable but with ‘Folksploitation’, Broadcaster and folk grande dame Peggy Seeger have pulled off a genre-defying album full of hypnotic and hook-laden delights.

“This is as far from traditional folk music as you can get,” she says, ”but these are impossible musical recipes that work despite everything. I feel like I’ve been musically ‘outed’ – this is certainly further out than I’ve ever been! I think Ewan would be fascinated.”

Broadcaster: “I love pushing a song to its extremes – I take all the crispy bits and see what I can do to reinvent them. Subverting songs is a long process and naturally there’s a lot that ends up on the cutting room floor. But I think we’ve achieved something unusual that challenges the notion of genres and pushes a boundary or two.”
broadcasteruk.com
peggyseeger.com