FORMER Westlife hunk Brian McFadden may be looking trim and sexy these days thanks to his new life in Australia but here he is thinking about days gone by when he would PIG out while in the top pop band.

Brian, always known as the beefier Westlifer constantly battled his weight while the papers charted his every ounce gained and lost. 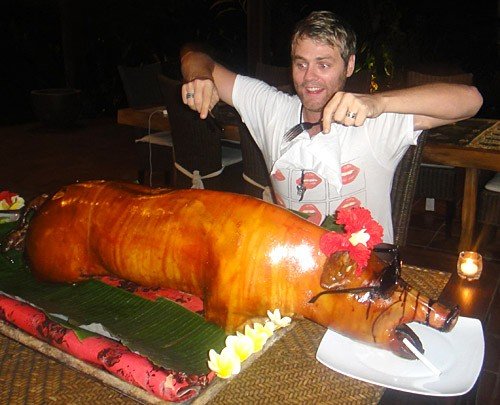 The star is set to relocate to the US after he completes work on the current series of Australia’s Got Talent, on which he appears as a judge.

He is set to release his new album Wall Of Soundz through Universal Records after his single Just Say So from the album was three weeks in the Australian singles charts.

Brian, 30, said: â€œIt will be my first time ever to release a record in America as a solo artist. It’s very hard over there but this is my last chance.

â€œI’m going to relocate there to get this business going.â€

Brianâ€™s fiancÃ©e Delta Goodrem is also currently based in the US as she is working on her fourth album there.
By Tina Calder
Â©FAMEmagazine