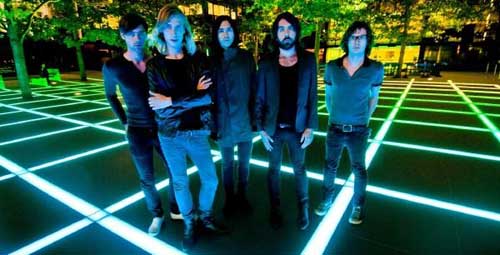 RED LIGHT COMPANY
ANNOUNCE DATE AT AUNTIE ANNIES
DEBUT ALBUM
â€˜FINE FASCINATIONâ€™ OUT NOW.
SATURDAY 23RD MAY 2009
Venue: Auntie Annies
Date:Saturday 23rd May
Ticket Price:Â£8.00 (Subject to booking fee)
Doors:7:00pm
Support:TBC + Club Science
TICKET DETAILS
In person:From 22 Ticketmaster outlets province wide) / Katy Dalyâ€™s Bar
24hr hotlines:Tel: (NI) 0870 243 4455 (ROI) 0818 719 300
Buy online: geturticket.com / ticketmaster.ie
For more see: cdcleisure.com/ redlightcompany.co.uk /myspace.com/redlightcompany
â€˜Fine Fascinationâ€™ is provocative, it explores the profundity and seduction of relationships, addiction and friendship by contrasting dark lyricism with euphoric instrumentals. Produced by Adrian Bushby (U2, Placebo, Foo Fighters) the sound is arena rock – grandiose, relentless and intense. Previous singles from the album include the stellar â€˜Scheme Eugeneâ€™ (single of the week in The Sun and B-listed at Radio 1 and MTV) and Arts & Crafts (also voted Zane Loweâ€™s â€˜hottest record in the worldâ€™ on Radio 1) confirming RLC as one of the few new breakthrough guitar bands to be championed by the station at such an early stage in their career.
With an impressive array of profile pieces in 2009â€™s â€˜ones to watch,â€™ features the hype machine is turning fast in their favourâ€¦ If thereâ€™s one Fine Fascination to have in 2009, it has to be Red Light Company.