By Cathy Black
SPRING & Airbrake is the venue for an explosion of music from three of the UK’s biggest bands.
Headlining the bill are Boy Kill Boy. 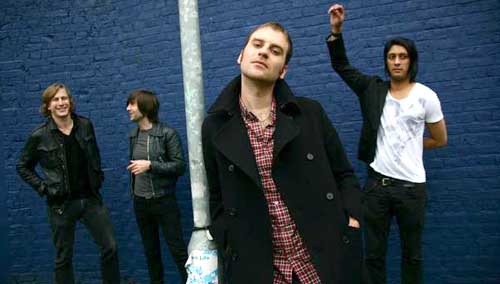 Following the gold-selling success of 2006’s Civilian, the Essex four-piece return with dazzling new album Stars and the Sea, a new up-and-at-’em attitude and some new friends and supporters.
Boy Kill Boy’s dark side and their refusal to play the same song over and over has bamboozled journalists.
“I was doing interviews for the first album where people were calling us an ’emo band'”, said Boy Kill Boy front man Chris Peck.
“I don’t know where they got that from. It’s got fuck all to do with us. Just because I’m not singing about wearing ‘the same jeans’ every day…”.
Joining Boy Kill Boy are Scotland’s best-kept secret The Dykeenies.
A five-pronged sensory assault of sex, synths and glamour music, the band comprises of three brothers and two best friends from the Glaswegian outpost of Cumbernauld.
The Dykeenies are the gentrified, pan-sexual soundtrack to a never-made John Hughes classic, a ten-legged future-pop megalith that’s about to send you scrambling for the dance floor.
The Dykeenies have found their route out, and are set to steal your hearts with dastardly panache and start your hips moving in an altogether unwholesome manner. There will soon be no escaping their gleaming new wave majesty.
Rounding up the bill are The Rascals.
Merseyside lads Miles Kane, Joe Edwards and Greg Mighall, these three 21-year-olds spent the last three years learning their craft as part of The Little Flames and touring with bands like The Coral, The Zutons and Arctic Monkeys.
It was during this time supporting Arctic Monkeys the three youngest Flames decided it was time to trust their hearts and their instincts and go it alone.
In September, 2006 they began jamming and writing new material as a three piece and The Rascals was born.
The Rascals were immediately signed to Deltasonic Records and played their first gig supporting Arctic Monkeys at Cardiff International Arena in June 2007. They have been on the road playing shows around the country with label mates The Suzukis.
In July 2007 they recorded the Out of Dreams E.P at Miloco Studios with Ben Hilier, which was released in November 2007.