Bowling For Soup, Forever The Sickest Kids, ‘A’ and The Dollyrats will be performing in Belfastâ€™s Spring and Airbrake on Saturday 23rd Oct 2010.

Bowling for Soup was formed in Wichita Falls, Texas in 1994. The band’s name was derived from a comedy act by Steve Martin. In 1998, the band relocated to Denton, Texas and recorded their second studio album, third overall, Rock On Honourable Ones (a reference to S.H. Rider’s motto “ROHO”–Ride On Honorable Ones) in 1998 for Denton music label FFROE.

Bowling for Soup released their first EP, Tell Me When Woah! selling over 10,000 copies, prompting Jive Records to sign the band.

They were nominated for a Grammy for “Girl All The Bad Guys Want” in 2003. In 2004, A Hangover You Don’t Deserve reseached the top 40 album charts and the single 1985 became their biggest hit reaching #23 on the billboard chart. 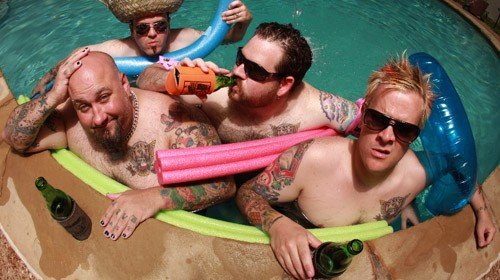 The band’s music has appeared on many sound tracks throughout the years, prompting them to release an album full of songs that have featured on the big screen. Sorry for Partyin was their latest release in October 2009. The band plan to begin recording a new album in June 2010

From Dallas Texas, Forever The Sickest Kids will support Bowling For Soup. Their track “Hey Brittany” has garnered over 2.5 million Internet plays and triggered a bidding war between eight major labels.

Motown emerged victorious, and recently released the band’s EP Television Off, Party On, which features five fizzy, electric songs that should whet listener’s appetites until the band’s full-length debut comes out in Spring 2008. Claiming to write songs that empathize with their listeners, Forever the Sickest Kids are destined to propel those smiles for miles to come. 2.5 million fans have already spoken. The final tally should be staggering.

The Dollyrots are one girl and two boys, a punk band with a dash of pop. They have a keen album BECAUSE I’M AWESOME out on Blackheart Records.

“Because I’m Awesome” was voted Coolest Song In the World 2007 on Little Steven’s Underground Garage and several tracks were featured in TV/films such as “Reaper”, “Greek”, “Ugly Betty”, “Sisterhood Of The Traveling Pants 2”, and “Bring It On – Fight To The Finish”. The Dollyrots are currently filming scenes for an appearance in the upcoming movie Girl trash All Night Long and the band is also in studio putting finishing touches on their 3rd full-length to be released mid 2010.
www.bowlingforsoup.com
www.foreverthesickestkids.com
www.thedollyrots.com
CDC LEISURE PROUDLY PRESENTS
BOWLING FOR SOUP
+ SUPPORT FROM
FOREVER THE SICKEST KIDS
‘A’
THE DOLLYROTS
SPRING AND AIRBRAKE BELFAST – SATURDAY 23rd OCTOBER 2010
Â£18.50/ 6:30pm Doors
VIP PACKAGE Â£38.50 to include Meet & Greet/Bag of exclusive merchandise/early access to venue
TICKET DETAILS
In person: From 22 Ticketmaster outlets province wide (Including Easons) / Katy Dalyâ€™s Bar
24hr hotlines: Tel: (NI) 0844 277 44 55 (ROI) 0818 719 300
Buy online: www.cdcleisure.com / www.ticketmaster.ie