BOWLING For Soup frontman singer/guitarist Jaret Reddick has revealed how he really feels about the band splitting from their record label. 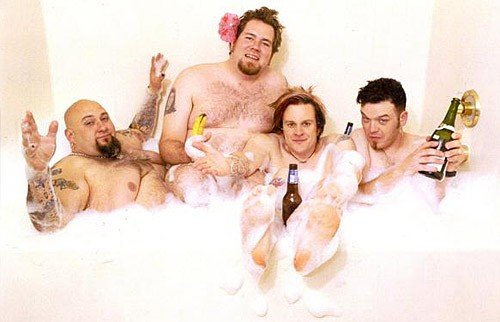 The band recently released their EP Fishin For Woos which is set to be followed by their first independent album release since they parted company with Jive last year.

Jaret explained: We split with our US label, JIVE, after 10 years in December last year. The sad thing is, Sorry For Partyin had only been out four weeks and no radio/ video campaign was ever launched.”

I wasn’t bitter, I understand business and that relationships change. It was time for the label, and BFS as well, to move along. But I was broken hearted that Sorry For Partyin never really got a shot. We worked really hard on that record, and for it not to get fair shake really bummed me out.

Following the Sorry For Partyin album’s late 2009 release, Reddick and bassist Erik Chandler returned to the UK in Spring 2010 for a special, pared-down acoustic tour.

Known for playing the occasional acoustic set in their native Texas, as well as regular acoustic radio sessions in the UK and the US, the idea to conduct a full UK acoustic tour was a gamble that really paid off, with sold out crowds every night and across the board critical acclaim from UK press.
After the tour wrapped, Reddick decided to return to the studio and start work on Bowling For Soup’s next chapter.

He added: So, after touring on a “shelved” album, I was like ‘we can either sit on our asses until the next string of dates, or we can bust our ass and just go make another record. So, after returning from our sold out acoustic tour of the UK in April, I locked myself in a room and wrote a record in three weeks. I was nervous it would sound like I just shit out a bunch of songs, but it all just came out of me, well . Like shit, but in a good way.

I sent the songs to the guys three days before we went into the studio and we went in and made the record in three weeks. I couldn’t be happier. I honestly think people will be blown away by this album.

It is simple and to the point, full-on BFS. Full on fun. It will make you want to drink beer and hug your friends.
www.myspace.com/bowlingforsoup
By Tina Calder
©FAMEmagazine.co.uk