By Andrea Clarke
Photo by Fabrizio Belluschi
TENNIS superstars Pat Cash and Bjorn Borg were found haggling with the general manager of the Culloden Hotel before leaving to play their first matches at the Odyssey Arena yesterday . 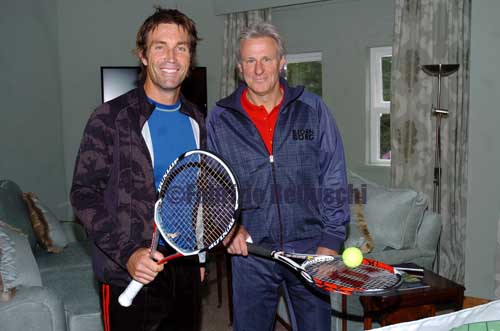 Cash and Borg, who are staying at the five star hotel in Holywood, officially opened the new bedroom wing at the estate and were so impressed with the facilities that they tried to get a good deal for next year.
The additional 26 bedrooms brings the Culloden’s total to 105 and marks a total investment of Â£3.5 million.
After seeing the new Amethyst Suite Australian tennis champ Cash said: “I know where I’m staying next year”.
The suite, created for guests who wish to enjoy spa treatments in the comfort and privacy of their own room, is the first of its kind in Ireland and impressed the tennis legends so much they were negotiating prices for their next trip to Northern Ireland.
“I thought it would be more than Â£1000 per night”, said Cash. “But I’m told it’s Â£450, so can we get that rate next year”?
Borg added: “I’m a witness, we can get that rate”.
Cash and Borg are among eight Tennis Legends playing at the Odyssey Arena this week.