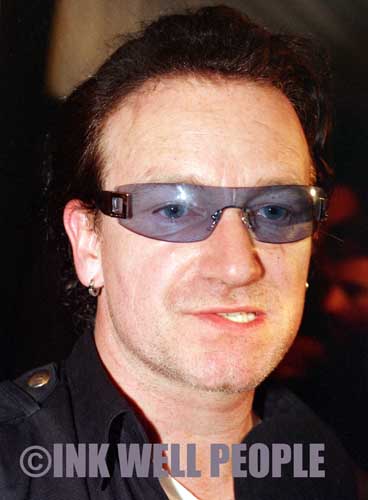 By Andrea Clarke
Photo by Fabrizio Belluschi
IRISH rocker Bono has revealed an Australian nurse was the inspiration behind his global fight against poverty and the spread of AIDS.
The U2 frontman met nurse Sue Germein on a plane flight over Ethiopia in 1985 and was awed by her work.
“She was the woman that got me fired up about these issuesâ€, said Bono.
“She had a huge impact on me. Her passion changed my lifeâ€.
Sue was working with a World Vision emergency medical team when she was asked to join a tour of the famine-ravished country with an Irish couple.
“I had nothing else to do so I went alongâ€, she told the Sunday Herald.
“Boarding the plane I met the couple. The man introduced himself as Bono and his wife as Ally.
“As we went along Bono began chatting away, telling me he was a singer with a band called U2 and that he had only recently been in Adelaide. I had no idea who they were.
“He was very charismatic, a great story teller and so much funâ€.
Bono had been asked to perform at the original Live Aid concert and wanted to visit Ethiopia to understand what was going on.
She said: â€œHe was genuinely caring. He wanted to know more and was very curious. His eyes were sincere. His sincerity is what struck me mostâ€.
Bono, Ally and Sue spent the next three days together, talking of how they could help change the world and still talk regularly.
In fact last year Bono sent Sue tickets to a U2 concert.
â€œHe sent tickets for myself, my husband and my four kids.
â€œHe wanted to meet the whole crew so we went to see him before the show. My kids were really embarrassed, they thought he wouldn’t know me.
â€œSure enough, he came backstage and jumped on me, giving me a big hug. The girls all got kisses and my son a high five.
â€œThey thought that was pretty cool. We spoke for half an hour or so and caught up and we actually delayed the show’s starting timeâ€.
Sue and her family sat next to Bono’s older brother, Norman.
She added: â€œI introduced myself and all he said was ‘You’re the one. You’re the reason why my brother’s here’. All I could say was ‘I don’t think so’â€.
Â©INK WELL PEOPLE